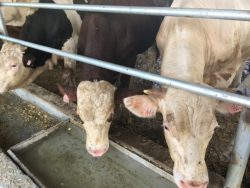 Today we got permission to see the bulls that have been stuck at the Turkish border for three weeks. They are well looked after, have sheltered stables, have fresh water and get (good) food regularly. In general, they are in good condition and people are trying to keep it that way. There is still hope that they can be sold as feeder bulls, as they are worth more than bulls for slaughter. It’s often all about business, just like this case. Options at this time are trying to send them back to Bulgaria, which is unlikely to succeed. Once animals have crossed the border, they can not return. This in connection with diseases. Another option is that they are sold to countries such as Iraq or Iran. Or ultimately to be slaughtered before they die one by one. At the moment, our organisations have sent an urgent letter to the responsible EU authorities to ask for their help in solving this problem. It is the EU that is responsible for this situation. It is known that bulls must be under 12 months and not be heavier than 300 kg. Yet there are now at least 500 bulls here that are heavier. And if the EU continues to send animals that are too heavy, the problem will only get worse here. We have also inspected 2 cattle trucks today with pregnant heifers and bulls for slaughter, both of which were okay.

Well, an overheated driver who told us that he had been waiting for three days at the border and had had to use every trick in the book to look after his precious, pregnant heifers. With temperatures of more than 40 degrees you can imagine how difficult that was! The infrastructure is not suitable. So transporting livestock to Turkey at this time is asking for problems. And violations! To be continued.