Home » Our inspections » Meeting with RDA about horse-welfare at markets, The Netherlands

Eyes on Animals has discussed its views with the Council for Animal Affairs (RDA) for the adjustments needed to better safeguard the welfare of horses at horse markets. We have drawn up a long list of conditions that a horse market should provide to meet all animal welfare and transport regulations. “Horse market towns” will have to choose: do they want to hold a festival, or a horse market that meets the law?

For several years, Eyes on Animals has reported large-scale and structural violations of the laws on the big Dutch horse markets. Annually, from midnight until the following evening, thousands of horses suffer under stress and exhaustion from partying crowds, noisy fairs, lack of water, food and veterinary supervision. Moreover, the European Transport EC 1/2005 regulations are massively ignored.

In response to parliamentary questions following the EonA inspection of the horse market Zuidlaren in 2015, where we once again reported an atmosphere of lawlessness, the State Secretary of Agriculture Van Dam finally stated that this has to stop. He commissioned the Council for Animal Affairs (RDA) to re-write the Protocol Horse Markets and bring the decoupling of horse markets and festivals into practice. He has asked EonA to give advice.

The fact that the State Secretary has now confirmed that a horse market is legally valid as a “place of transfer” is very good news. For the government now recognizes that the time a horse stays at a market is in fact a part of the transport period, and that therefore all European rules for a long horse transport (> 8 hours) should be enforced. Therefore, EonA has advised the RDA that a horse market should not take longer than 4 hours. In addition, every single horse must have access to water. Also, foals and young, unbroken horses should be excluded from participation. 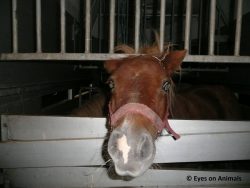 Furthermore, Eyes on Animals has expressed its concerns about possible conflicting interests of the ‘horse market towns’. They are responsible for licensing, law enforcement and are also often co-organizer. Last year, at the horse market in Zuidlaren, the municipal organizer refused protection of the EonA inspection team when we were threatened while filming legal violations and horse abuse. The perpetrators were not prosecuted. Therefore, EonA stresses that local authorities need to be monitored for compliance with the new rules, and a clear penalty provision should be linked to the Protocol.

Finally, according to EonA, the new Protocol should be an intermediate step. The aim should be to further complement the Dutch Animals Act with more detailed prohibitions.

Do you find our work to improve horse welfare important? Please help us help animals and donate!