stunning of pigs before slaughter 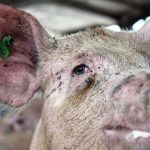 Throughout the years, Eyes on Animals inspectors have visited many slaughterhouses. We see many – major and minor – differences in the equipment used, as well as the handling of the animals. Differences are particularly noted in pig slaughterhouses- some plants use electrical stunning while others use CO2 to render the pigs unconscious before slaughter. We decided to lobby … END_OF_DOCUMENT_TOKEN_TO_BE_REPLACED 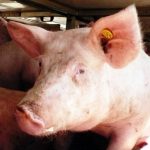 After requesting to visit their slaughterhouse, Vion in Boxtel agreed to give Eyes on Animals a tour of their plant where 10,000 pigs are slaughtered each day. Vion uses CO2 gas to render the pigs unconscious before being cut and bled-out. Unconsciousness using CO2 gas is not instantaneous. Scientific studies show that it can take up to 60 seconds (Rodríguez, P.; Dalmau, … END_OF_DOCUMENT_TOKEN_TO_BE_REPLACED

In 2019, Eyes on Animals, together with the Dutch Society for the Protection of Animals, wrote 10 … END_OF_DOCUMENT_TOKEN_TO_BE_REPLACED

I just returned from Turkey a little while ago and wanted to write to you about how things went.
In 2013, trainer and inspector Asalet and I started inspecting slaughterhouses in Turkey where animals from Europe were being transported to ….