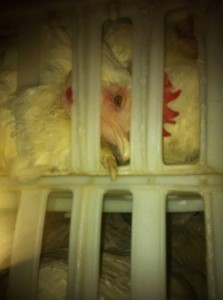 A team from Eyes on Animals and Animal Welfare Foundation was conducting random inspections of livestock trucks tonight and spotted 3 poultry trucks being loaded at a farm in Gelderland. The trucks were from a company that we know regularly transports spent poultry to slaughterhouses in Poland. Being “spent”, these birds are often already in a compromised condition, so loading and long-distance transport can easily cause further problems. We decided to trail the second truck leaving this premise. The loading of the first two trucks took 5 hours, according to the driver that we later spoke with, “The chicken catching team was unmotivated and lazy, it was a joke for them”.

Due to this delay, the driver was running hours late and would not make it to the slaughterhouse in Poland at the time he was scheduled for. The transport journey to the slaughterhouse in West-Poland took 12 hours and 20 minutes. The vehicle was equipped with a good, breathable tarp to shelter the birds from the wind. We could only check on the condition of the poultry loaded at the back, where the tarp was loose. Despite being able to see only some of the birds, we still found a few in very poor condition bleeding heavily. Their injuries were fresh and therefore a sign that the loading was done in a rough manner. According to the law, these injured birds have a right to first-aid but of course in practice this was impossible – there is no access to the birds once they are loaded and en route. They were left to suffer. 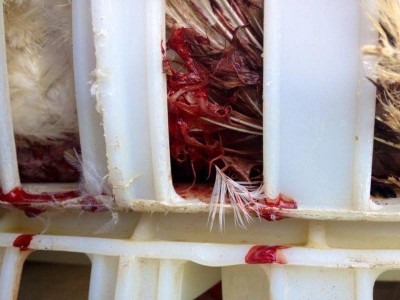 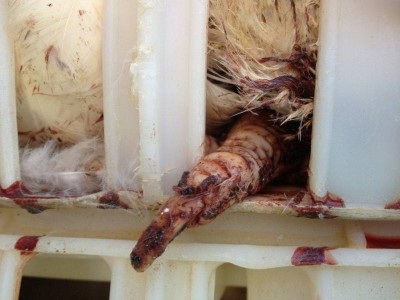 In each crate there were 9 birds- thus within the EU density norms. Nevertheless the birds were very crowded and had barely any head space. The temperature the next morning was 28 degrees, aggravating the thermal conditions inside the crowded crates. Due to having left the farm late, the birds arrived at the slaughterhouse in Poland at the hottest part of the day. The truck that we trailed was allowed to enter the plant right away, but two other trucks arriving full of poultry, one of which also came from The Netherlands had to park and wait in the direct sunshine.
. 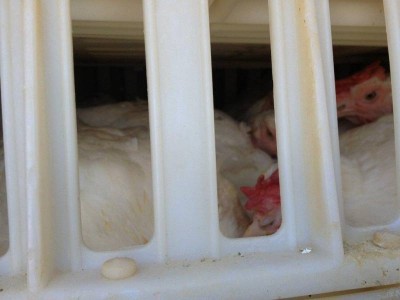 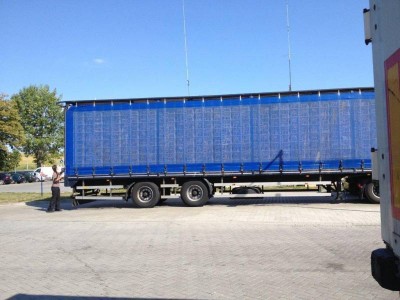 The maximum number of hours poultry are allowed to be transported and wait in their crates in a slaughterhouse lairage without water is 12 hours. Therefore this consignment was already in violation. But it gets worse – the slaughter speed at this plant runs at 3000 birds per hour. Considering each truck can load roughly 5000 birds, it means that many of the birds would wait another 1.5 hours after arrival at the plant. And not to forget the 5 hours the birds had to wait during the loading process. It means birds in reality were without water for 18-19 hours.

EonA/AWF will send a letter of complaint and our report about this trailing to the EU Commission, the authorities from The Netherlands and Poland Ministries of Agriculture and representatives from the Dutch poultry industry. We will insist that they adequately enforce the 12 hour law and penalize those that are not respecting it. We will also advise to EFSA, the scientific committee that advises the Commission, that the loading densities for poultry be decreased.

We would however like to thank the chauffeur for being in dialogue with us and letting us inspect his chickens on board. It is clear, also for him, that the way chickens are caught and loaded must improve as the driver is limited in what he can do later.

We can only hope for the good will of this transport company to load fewer birds per crate in the future, regardless of the EU norms, and particularly on such warm days. We hope that this transport company will be interested in our project of a new design of crate that provides access to the birds as well, so that ones found injured can be put out of their misery instead of neglected.