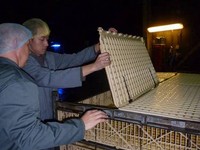 Today we were welcomed to visit a chicken slaughterhouse in the Netherlands. It is a slaughterhouse that only slaughters broilers (chickens bred for meat-production). When we arrived, some of the broilers in the drawer containers were stored in a dark lairage with electronic fans, the birds appeared calm.

CO2 gas is used to stun the chickens. Chickens are stunned in the gas chamber with two different concentrations of CO2 in order to better minimize pain, stress and suffocation. Through several small windows in the wall of the gas chamber, we were able to observe the chickens inside the CO2 chamber. Most of the chickens inside were quiet and sleepy. Shaking head, opening beak and flapping wings were present but only in some individuals. Our feeling is that gas stunning in this slaughterhouse provides better welfare than the electrical water bath system which requires the birds to be manually removed from the crates and shackled upside down and still alive, causing more stress and also pain. However, the drawback of the system here was that the broilers are first removed from their containers in order to pick out the dead birds, before going into the CO2. They are not manually unloaded, but the containers, stacked 6-high are tilted over so the birds fall out onto a conveyor belt. The plant manager acknowledged that this does cause some stress and informed us that one of their other plants in the Netherlands is now using a system whereby the chickens can be stunned directly in the containers. We expressed our approval of this and encouraged that all their plants slowly move to such a design. The more stress you can remove from the slaughter process, the better.

Drawer-containers are used to transport the chickens to their plant. They are made out of a plastic drawer, metal frame and a metal door which can only be opened by humans. The gap between the plastic drawer and frame is large enough to avoid that birds get stuck. Although the door improves the accessibility, there is no access during transport because they are stacked in such a way that the doors are facing inside instead of outside of the truck. There are small holes on the floor of each drawer, which not only prevents faeces dropping onto the birds below, but also permits some air flow during transport.

For our report on chicken transport and welfare, the experience we gained in this plant is very useful. We would like to thank the slaughterhouse for being so open and always interested in the newest animal-welfare findings.