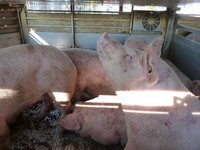 This morning we dropped by the pig export station in Lunteren, called Vlastuin. Here pigs from different Dutch farms are collected and then several hours later, or even a couple of days later, reloaded and sent for export to countries such as Poland, Germany, Hungary and Romania. We had received numerous complaints from Dutch and German drivers that often 220 “slaughter” pigs were being loaded on trucks here and that the official veterinarian was allowing it. This density is too high and illegal. The man who received us and showed us around promised that they never do this, they only allow 200 on board. Unfortunately during our visit we did not see a truck being loaded, and thus have to take his word. When we arrived a truck from the company Boerkamp was just leaving.
The facility was basic – with pens with cement floors, some equipped with a shower system to cool and calm down the pigs in the summer which is good. Each pen had a water trough, albeit a very small one with just room for 1 pig to drink at a time. Better would be a long trough, for social facilitation. The loading docks were good, as they were built at the same height as the trucks meaning pigs could just walk straight on and off, without having to climb up and down a ramp. Walking up and down can be difficult for pigs, particularly old sows that often suffer from arthritis. We are told that pigs arriving very sick or injured are put down (humanely killed) by the workers here. We did observe 2 dead piglets at the unloading dock, but are not sure of their cause of death. We are told that the official veterinarian is not always present during loading, he comes to check on the fitness of the pigs, the transport vehicle and prepares the papers, but he may not stay to observe the pigs being loaded into the truck. It depends if the transport company and organizer has “stal keuring” (in-stall inspection) or “klap keuring” (inspection at loading).
One pig truck was waiting in the parking lot. We looked inside- the loading density of this one was acceptable. We will keep an eye on pig trucks leaving this facility, to be sure that loading densities are being respected.