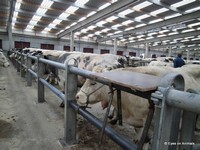 The livestock market in Ciney in , one of the largest livestock markets in , was visited by Eyes on Animals inspectors. Around 2400 cattle and calves and a small number of horses, ponies and donkeys were present this day. The market made a much better impression than during an Eyes on Animals visit two years ago. Back then we observed animals in very poor condition. Now the animals appeared healthy. There were mostly Belgian Blue. There were also many cows of French breeds, that are easier to handle and healthier than the Holsteiner breed we mostly see in The Netherlands. But also the few present  cows seemed rather healthy. 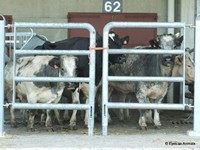 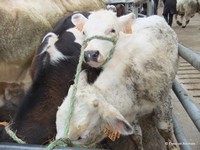 Even though our visit was unannounced, the reaction to our presence was relaxed. The market director asked one of the three veterinarians to talk to us and guide us round the market. Both he and the announcer/translator and the market director were very willing to answer our questions afterwards. The atmosphere at the market was calm. There was however an incident. A cattle-dealer reacted quite aggressive. He approached us after receiving questions from fellow-cattle-dealers about our presence.

Most animals were taken to the loading bays the evening before the market. There was enough water and a little bit of hay. Unfortunately at the market itself there was no water and also no straw or bedding. The explanation for this was that it would be too much hassle to clean the floor.

Despite the slip-resistant surface the floor was slippery. Some cows slipped away a little and a calf that was pulled by a child with too much force almost slipped. The boy was obviously too young to do this. Because of summer holidays lots of children were present. Most children only walked around at the market, buts some also helped with handling the animals. Some animals were not able to lie down because they were tied on too short. And some cows got their ropes tangled up in each other because they were tied on too close to one another.

We were impressed by a system that is used for controlling the identification, registration and monitoring of animals. All animals are scanned and if there have been problems with an animal at the farm, this is registered. The veterinarian can then retrieve detailed information from the system and then take action whenever an animal isn’t healthy. Not only is the animals refused, the veterinarian in question and authorities are informed.

What we noticed negatively in particular was the unnecessary hitting of cattle with sticks on animals were not aggressive and already moving forward. Many times they weren’t hit hard, but sometimes it did appear to be rather hard-handed. We also noticed a cow being kicked in the side to wake her up and a tail being twisted.

We are happy that this cattle-market, despite previous experiences and bad press, generally made a reasonably good impression. We are asking the market manager that in the near future the floor be covered with bedding, the hitting with sticks be less hard-handed and kicking and tail-twisting never tolerated, which is contrary to EU legislation. We also will request that all animals be tied on by longer ropes so that they can lie down and the risk of animals getting tangled up in each other be prevented.

We thank the people of this cattle-market for their hospitality and openness about the way things work at the market. 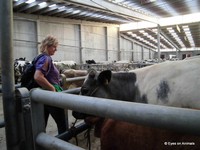 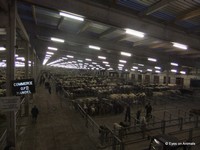