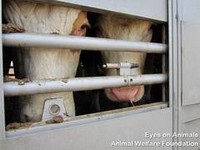 Today we held a meeting with the Bulgarian veterinarians at the border inspection post in Kapitan Andreevo, beside Turkey.  They confirm what we thought- they no longer permit trucks transporting adult sheep on four levels. They agree with the reports and letters we sent about the problems 4-levels cause – the adult sheep indeed do not have adequate headroom or air-circulation.
We also draw their attention to the fact that many transport companies are claiming to unload and rest animals on long-distance journeys to Turkey at places that in reality cannot accomodate animals. We saw journey logs this week claiming to rest animals for 24hrs at Svilengrad, a control post which is in reality closed but up until yesterday was still on the EU list, and at Kapitan Andreevo, which is simply the name of the border crossing! Because of this fraud, animals have in reality been left on trucks for 50 hours and more (maximum permitted is 29)! The Bulgarian authorities in Sofia took immediate action and alerted all EU Member State officials of this fraud. We have also sent complaints to those transport companies and organizers involved.

There were many trucks today waiting in No Mans’ Land. Two from Bulgaria with adult sheep which were in good condition. The animals appeared fit, loading density was low, there was plenty of bedding and the sheep had adequate headspace. 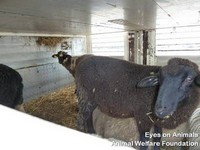 We also observed many trucks, from French, Dutch and German transport companies with pregnant heifers on board. The transport conditions were good- plenty of clean bedding, reasonable loading densities, feed and water on board. 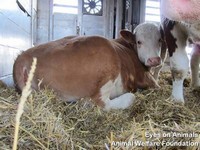 However, later on the Turkish side we check a truck from the company Keus en Mollink, organized by Klompjan, and find a cow showing signs of weakness on board. She is breathing heavily, groaning, has very red eyes that are half-closed, and does not want to get up. 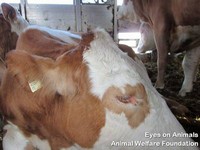 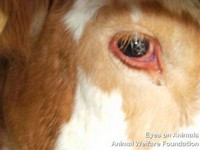 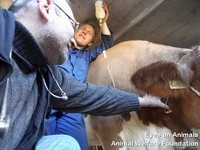 Within 30 minutes she perks up a little. We are later assured by Klompjan that the cow arrived at the final destiantion (Ankara) in good condition. On board there is also a new-born calf. During the night a cow gave birth on board the truck. The driver says that he milked her and fed the calf the important colustrum and put him in a separate compartment on the truck to avoid that he be trampled. 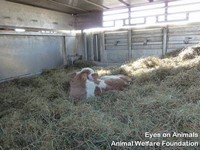 Although the drivers really made the effort to make the best of this very undesirable situation, we are going to look into where this went wrong. Perhaps the pregnant heifer had an early birth, but perhaps she was too far into her gestation period at the point of loading.