Today the EonA/AWF team dropped by Aygüler Dericilik slaughterhouse in Kazan near Ankara in Turkey.

This slaughterhouse is large and sells its meat to various companies, including Namet to all parts of Turkey east of Ankara. The plant is run by two brothers of which we met with one of them today. We explained to him our work and reason for being there. We showed him positive examples and Dr. Temple Grandin’s designs and tips on how to use animals’ natural behaviour to reduce stress.

He made it very clear that he was not interested in improving animal-welfare if it cost him any money. He claims he built all the installations himself to save money. It was hopeless to talk to him so we asked to see and film the lairage, raceway and slaughter area.

Although each slaughterhouse we have visited in Turkey so far has had its serious welfare problems – this slaughterhouse was absolutely horrible. The suffering of the Charolais and Holstein bulls was heart-wrenching to watch. The design of the raceway and slaughter-box was a catastrophe, the floor was incredibly slippery and the handlers were ignorant, resorting to brutality.

Tomorrow when we meet with the official responsible for animal-welfare-during-slaughter at the Ministry of Agriculture we will insist that this plant be shut down. 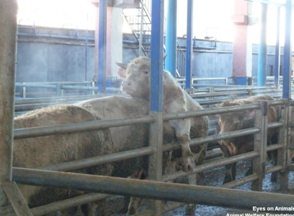 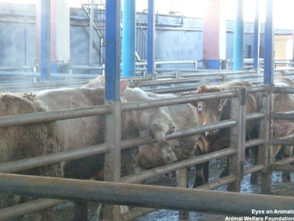 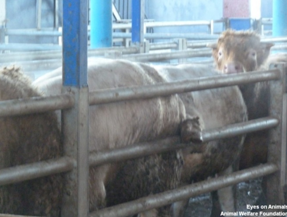 Bulls regularly mount each-other to establish hierarchy and tend to do it more frequently when excited or nervous. Despite this plant specializing in slaughtering bulls, the raceway did not have any anti-mounting equipment and the side of the raceway was not solid. For this reason bulls were regularly seen jumping on the backs of the one in front and then getting their legs caught when falling back down, causing injury to their legs. 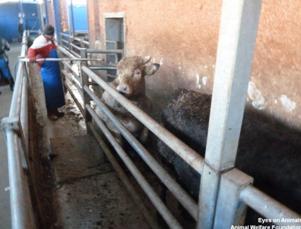 The floor of the raceway was so slippery and covered in manure that every every second bull fell in just this section. 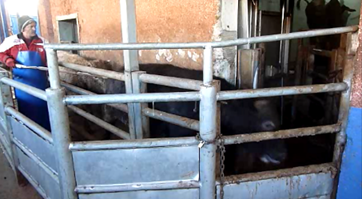 The bulls are then made to walk up a slope that was extremely slippery, turn 180 degrees and enter a trip-floor box. At this corner each bull fell down. We counted the same bull falling down three times waiting in this corner for his turn to enter the box. The worker just continued to prod him with an electric prod. The bull was panting and breathing hard from the stress. 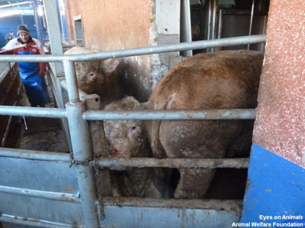 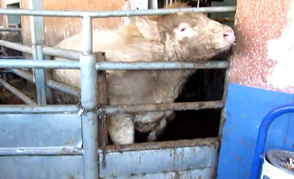 Some bulls even tried to jump over the fence at this sharp and slippery corner and one fell down and hit his nose on the bar which immediately started bleeding. 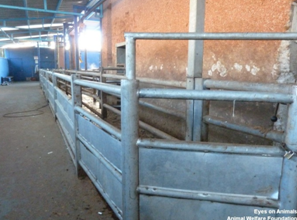 It was clear that this dangerous and ridiculously designed corner regularly caused panic, as it was the only place where the fence was built higher, to block ones from trying to escape and jump over it. 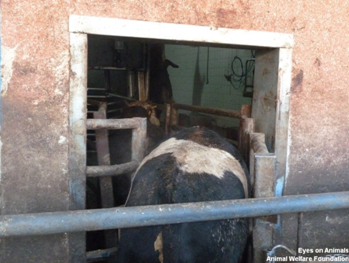 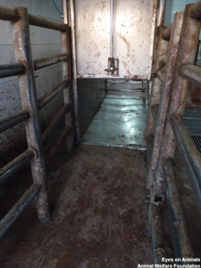 Once the bull turned 180 degrees to enter the trip-floor box, he could see the entire kill floor and all the workers. These distractions caused further panic. The floor of the raceway and trip-floor box was as slippery as a skating rink. 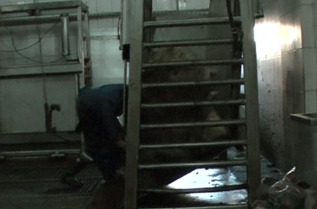 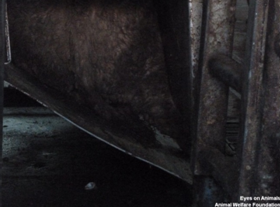 The bulls panicked in the box while the trip-floor was raised on an angle. They continuously got their legs caught in the front bars of the trip-floor box while trying to keep themselves in balance. A chain was then placed around the leg and pulled, despite the leg still being blocked by the side metal door of the box! 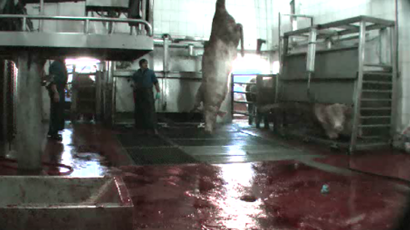 The bulls were then hoisted by one leg all the way up to the ceiling. Not one part of his body could touch the floor anymore; 600-700kg hanging by a metal chain around the ankle and all the weight pressing down on his lungs and other internal organs.

At this point the bull would start screaming – the entire slaughterhouse was so loud with the sound of screaming bulls. The worst was that some bulls were left to hang like this for 2 minutes long before having their throat cut.

Some did not have their throat cut properly either, with the butcher having to return to the hanging bull to cut him again.

The bulls were clearly alive long after the cut, moving and blinking their eyes and trying to upright their heads.

We returned to the office of the boss to tell him that his slaughterhouse has major welfare problems and said goodbye. We also quickly gave the two veterinarians present our opinion who seemed to agree but felt powerless.

We could not do anything to help alleviate even a little bit of the suffering of these bulls here today. The attitude of the boss means we never can. We will therefore notify the meat companies buying from this slaughterhouse and insist that they stop and ask the Ministry of Agriculture to shut it down.