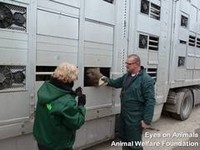 Today a team from Eyes on Animals and Animal Welfare Foundation inspected EU livestock trucks heading into Turkey. We observed four consigments of pregnant breeding cattle, organized by Klompjan Livestock Trading (3 of which were being transported by Keus en Mollink that Klompjan contracted out, and one by Klompjan transport itself). They all stopped at the Turkish side of the border to feed the animals. Conditions on board were good- the cows had adequate space, were fit and there was plenty of bedding. Unfortunately the pregnant cattle on board three of these trucks will have to wait until Monday before continuing on their journey because of irrational paper problems. Two trucks from the Hungarian company Markus were also present, with Austrian cows. On one the headspace for several cows was limited but general conditions were adequate.  The drivers claimed to have already fed the animals in No Man’s land earlier this morning.
As in the past, we observed better transport conditions for breeding cattle than what we often see for “slaughter” animals.
Unfortunately we observed again transport papers claiming that animals from far away heading to Turkey had been rested at a control post, Svilengrad in Bulgaria, despite this control post being closed and the animals never benefiting from the rest. The Bulgarian veterinarians at the border have been stamping these papers, despite knowing that it is not true. Many different transport companies and veterinarians are involved in this fraud, but today it was papers from the Hungarian company Agracoop indicated they will stop at Svilengrad. We will confront the Bulgarian border inspectors and Agrarcoop about this.
At night we observed from far the unloading of Estonian cattle (3700km away!) at the border to have their blood tested. This is a new requirement since several weeks- a few animals from each truck are unloaded and have blood drawn to test for diseases. We were not allowed to observe this process up close. As this creates extra stress and delays, we are hoping to put a stop to this. Health tests should be done at the place of origin, and not in the middle of the journey!

The drivers of Keus en Mollink and Klompjan did a good
job at distributing feed (hay) to the cattle during a stop
on the Turkish side of the border. 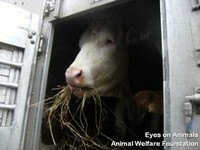 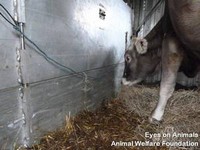 The new dividers on the Klompjan vehicle were very good as they
were solid, down to the floor. Most dividers have an open space
at the bottom, risking breaking the legs of animals or getting them trapped. 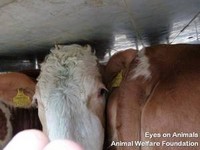 Several Austrian breeding cattle on board a Hungarian livestock
lorry from the company Markus had limited headspace. 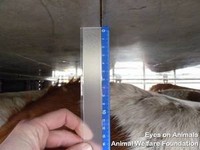