On the 14th of December the EonA/AWF held a meeting with the boss of this slaughterhouse that we had never been to before. He admitted to us then that his current slaughterhouse was very old and the installations needed to be modernized. They hoist animals alive, do not have any restraint box even for bulls etc..

We looked through the Temple Grandin book about design-tips to reduce risk of injury and stress for animals at slaughter, the V-Cons catalogue for restraining-boxes, photos and footage of  “better” slaughterhouses we had been to etc…

He assured us that he was planning on building a new slaughterhouse within 6 months or renovate this one completely to abide the new national Slaughterhouse Technical Regulations coming into force this January 1, 2014…

This morning we were invited by him to return to see the actual slaughtering process of cattle at his plant. 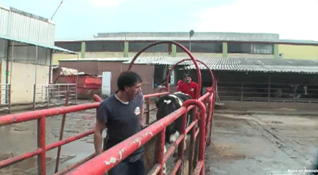 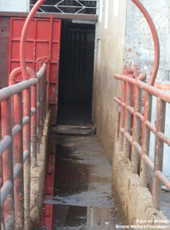 Indeed the facilities were very old and risked injury. There is a steep and short unloading ramp that ended in a sharp 90 degree left turn into a narrow passageway,  potholes in the floor of the lairages, old feeders partly broken and an uneven and wet floor in the raceway. 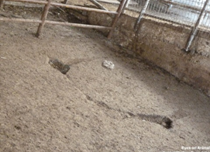 The slaughter area is just an open room with a concrete floor where cattle are brought into, one at a time, to have a chain placed around their hind leg, made to lose their balance and fall hard onto the ground and then be hoisted alive and have their throat cut. 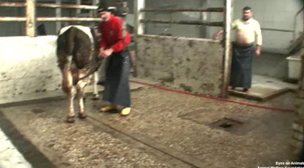 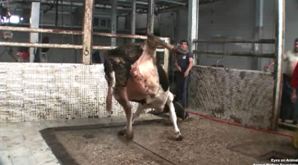 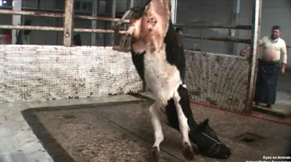 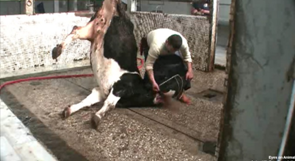 What was better in this slaughterhouse compared to the others we saw is that the kill floor had a better drainage system and the worker sprayed the floor down after the first animal so that the second bovine did not have to fall into the blood of the previously slaughtered cow.

Unfortunately the floor was not yet clean when the third cow came in though, so she was made to lose her balance and fall into blood of the second cow and risked getting blood and dirt in her freshly-cut wound after being cut herself.

The slaughter-man was also calm – we did not hear any yelling or eye-poking. 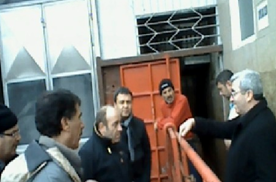 We are going to remain hopeful – the boss and his staff were open-minded towards our advice and eager to listen. Asalet explained to them about the importance of making the floor anti-slip, gates high enough to avoid injury, level unloading ramps and no sharp curves, avoiding shadows and puddles making animals balk etc…

And the boss and the men responsible for slaughtering the animals were all in favour of stunning the animals first and said they will switch to a captive bolt pistol gladly as soon as the Turkish population expresses that they accept stunning.

Today we had observed three very tame dairy cows being killed. The workers just had to walk them towards the slaughter room and they followed so obediently and trustfully. When the worker placed a chain around their leg, they just stood there.  But had they been bulls or “feeders” not used to human contact, we can imagine conditions being chaotic and stressful for the animals particularly when the worker needs to get close enough to put chain on back leg. 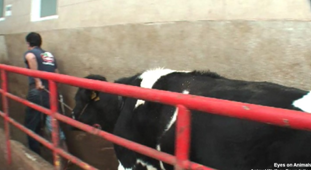 The director assures us again that he will buy a proper restraining box for his new plant and wants his staff to be trained by the Turkish Training School VHSD financed by the RSPCA in the UK that we told him about.

We are definitely going to stay in touch with him to make sure things move forward and that current conditions are phased out as soon as possible.