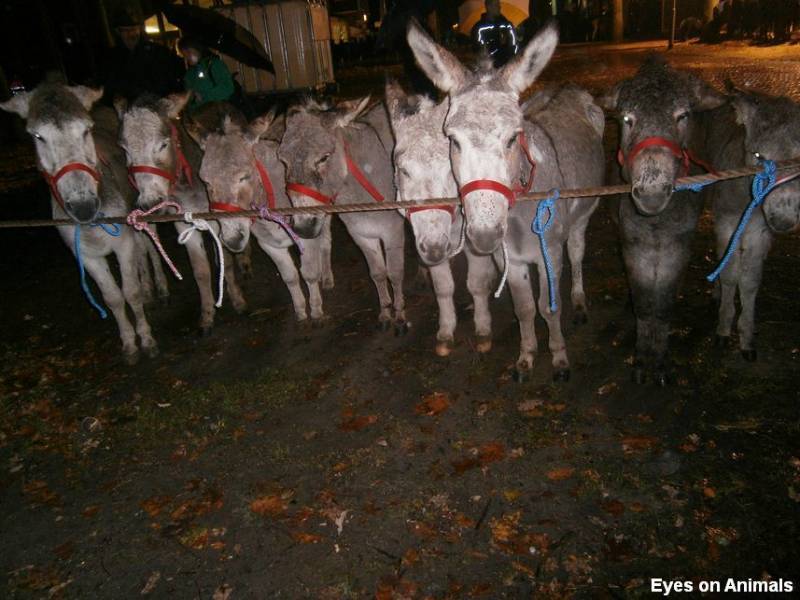 Today our teams visited the yearly horse market in Zuidlaren (Drenthe, NL). There were 1679 horses, ponies and donkeys. Two of our inspectors were present at night and early in the morning and two others during the day. Some of the animals were tied on too close-by to the noisy fair. Trucks and trailers did not only come from Holland, but also from Spain, Poland, England and other countries. The offloading was in many cases difficult, also due to the noise from the fair which distracted the animals and made them nervous. 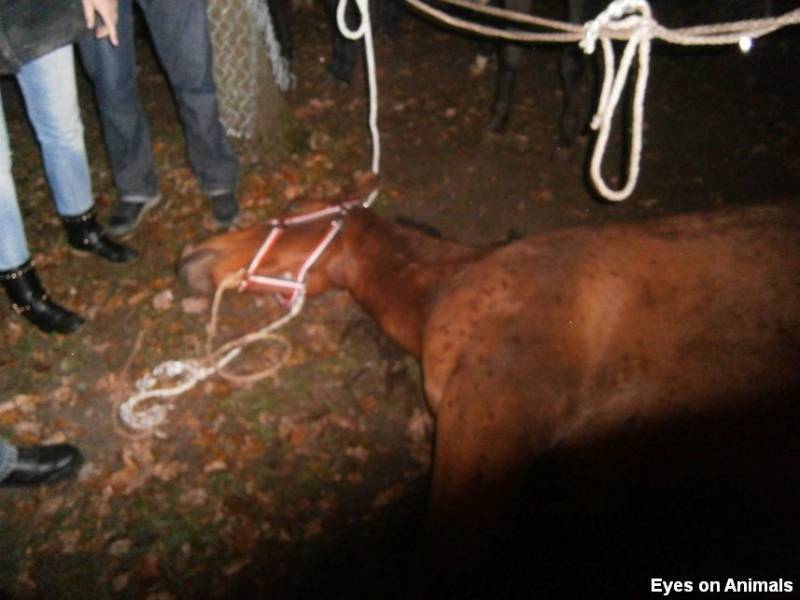 Around 3am a horse ran into a tree, fell to the ground and almost hung itself. Bystanders cut the rope and covered the horse with straw. It took a long time for people from the organisation to be found; finally when we found them they called a vet. The vet arrived at 4am. The horse had already got up on its own by then, after having laid on the ground in the rain for an hour. It wasn’t until around 5am that other vets arrived.

At night it rained a lot. For donkeys, covering is a necessity, because their hair coat barely offers protection against rain. The horses had enough space this year, likely because there were about 600 horses less than expected. Overall, the animals were tied on correctly. We did not see any acts of violence of harsh abuse. There was enough straw and hay. Even though water was supplied at the market, hardly anyone made use of filling up buckets to offer it to their horses on sale. During the whole market we have only seen one horse owner who gave his animals water. Buckets for the drinking water ‘disappeared’ over the course of the night. Eyes on Animals would like that the organisation coordinates volunteers or students next year to be in charge of distributing water to the animals.

There were horses present with docked tails, even though there is a ban on this practice and the Horse Market Zuidlaren Organization has even signed a Protocol on the Welfare Conditions at Horsemarkets, which among other things says horses with a docked-tails must not be accepted for sale. Furthermore, there were some very skinny ponies and many foals, some of which had only just been weaned. There was also one hybrid zebra present who was sold to go abroad. 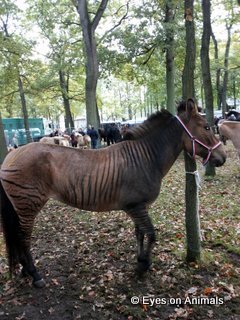 We caught two foreign traders attempting to load five horses and ponies in one horse trailer meant for only two horses. We got the NVWA export inspectors to take a look who in turn stopped them. For the rest, the loading of the animals went relatively calmly.

The market manager was not present at night. When we talked to him during the day he didn’t seem interested in our recommendations to better guarantee animal welfare at this market (full-time presence of a veterinarian, distributing water, refusing horses that are to skinny or have docked-tails). There is hardly any medical care and supervision. Only between 05.00 and 10.30 were the veterinarians present. The horse market in Zuidlaren should take the horse market in Hedel (Noord-Brabant, NL) as an example to strive towards. After Eyes on Animals condemned abuses in 2010 in Hedel, lots of improvements have been implemented and the situation there now is much better and organized than it is in Zuidlaren. We would like to start a dialogue with the Zuidlaren Horse Market organisation and the municipality of Tynaarlo to discuss possible improvements.