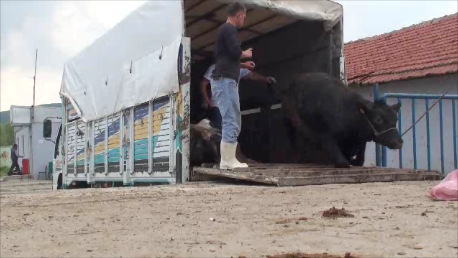 Today the EonA/AWF team met with the director of a Turkish slaughterhouse who was open enough to let us view the unloading and slaughter of cattle in his plant. He was curious of our opinion and open to cooperation. This plant received many cattle trucked in from the EU. He told us that some were arriving so dehydrated that their lungs were stuck to the chest cavity, and when they cut through the lungs they would break apart like sand. He named several transport companies that delivered animals in a particularly poor condition. We were not surprised by the names he listed- same as from our own reports of inspections of the livestock trucks at the EU/Turkish border. At this plant they also would rather stun the animals before slaughter, but it is not allowed. Too many customers are worried it would not then be Halal. This plant gave a calmer impression than the last one we visited, simply because the slaughter line is slower. They move one bovine at a time through the chut to the kill box. But in several cases the handling was not acceptable. One bull was hesitant to enter the kill box. The worker thus grabbed his tail and twisted it several times very tightly – something that causes a lot of pain (see first photo below). The bull ended up falling down (see second photo below) because he had an injured back right leg- the same leg that would seconds later be hoisted up on a chain while the bull was fully conscious. 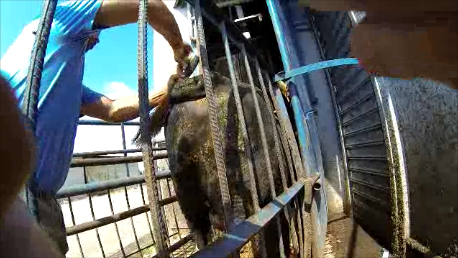 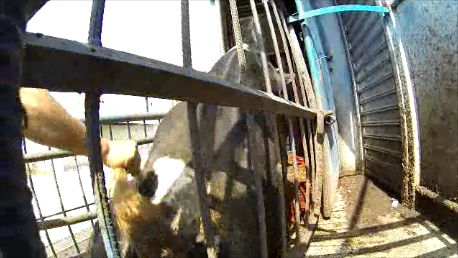 One can only imagine how much pain this slaughter method – of hoisting conscious 600-800 kg animals by one leg- when the animal is injured on top of it. The floor of the raceway had anti-slip grooves but nevertheless a few cattle slipped due to the build up of diarrhea and urine on the floor. However, because of the slow pace, falling was not as frequently seen as in the slaughterhouses visited earlier this week. During our visit a national Turkish truck arrived with bulls and one cow loaded on board. All cattle were tied on but many had fallen during the journey. The cow was underneath the bulls and could no longer get up. She tried but her hind legs slid out from underneath her. Her hips seemed to have been out of place. The workers pulled the bulls out with their tether which resulted in many resisiting the pull and one even tripping over his feet, falling down heavily on his knees (see photo at top of page). It was painful to watch. Much better is to allow the animals at the own pace to walk off the truck, or to walk slowly at an angle behind them. Cattle, like all animals, need time to explore the new environment and get their footing. 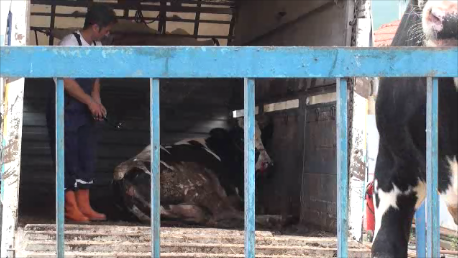 The downer cow was given a few electric shocks but to no avail. She bellowed out in pain and still could not get up. At this point we were politely asked to stop filming and were accompanied to the front parking lot. They admitted that in such cases it would be better to stun such an injured animal on the truck, but this is not done or approved in Turkey. Instead they will drive the truck closer to the entrance into the Halal kill box and drag her out of the truck, so she can still be put through the slaughter line. Sadly we heard her cry out in pain from the parking lot, as she was likely being dragged and hoisted upwards by a chain on her injured legs.

The situation inside all Turkish slaughterhouses we managed to visit this week is horrible. But we must not just criticize and get angry; we must communicate our concerns clearly, give advice and assist when they are willing to put the improvements into place. A lot of the suffering is likely from bad habit or not knowing better. We are considering raising funds from those that made huge profits trucking animals to Turkey from the EU, so that we can send cattle behaviourists and professional slaughtermen to these plants to correct the flaws in design of the raceways and kill-box, train the workers in correct handling of animals, and how to handle ones that arrive injured in a way that causes less suffering.