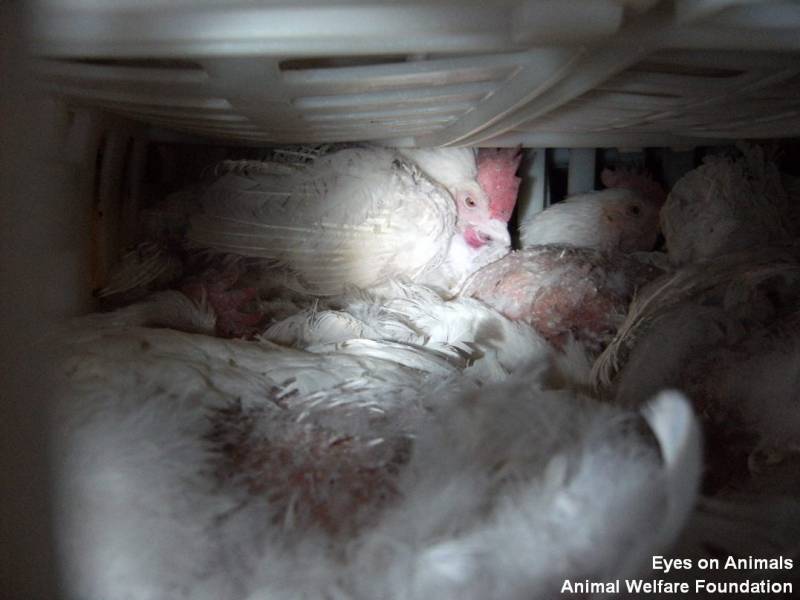 In the evening a team from Animal Welfare Foundation and Eyes on Animals spotted several chicken trucks at a farm in Brabant. They were from a company that is known to bring spent hens and old-breeding birds for slaughter to Poland. As these birds are usually in a fragile condition, and the loading and transport of poultry is difficult to do without causing suffering, we decided to follow one of these trucks. It took 2.5 hours before the truck was finished with loading. It then drove throughout the night across Germany and arrived at a slaughterhouse in west- Poland 12.5 hours later.
The truck was equiped with a very good tarp, protecting the birds inside at least from the cold wind. We did not observe any serious injuries on the birds that we were able to see. They however looked very crowded and some of the floors of the crates above were bending down from the weight. The driver said he would let the slaughterhouse know that we were behind him. Instead of that working in our favour, upon arrival there was no chance of us getting in to watch the unloading. However, we met with the official veterinarian from that region who had the transport papers faxed from the slaughterhouse so that we could see how many birds in total were loaded and how many crates. There were not 9 loaded per crate as we were told, but rather 10. Neverheless, they were still within the EU density limits. The headspace for the birds, like with almost all poultry transport, was not sufficient. They cannot stand up in a natural position. This was particularly sad for the breeding roosters on board, who must have had some difficulty crowing due to the lack of vertical space to perform this inherent behaviour. The maximum transport time for poultry in the EU is 12 hours without water, so they were just over the limit. The slaughter line at the plant is 3000 birds per hour, which would mean that some of the birds would have another 4 hours of waiting in the crate until they were killed (because two trucks from Van der Berg arrived at the same time, each with around 6000 birds on board).  We will send our report to the EU and Member State authorities, as well as the chicken industry representatives. We will request that EFSA, the scientific-committee that make recommendations to the EU about animal welfare, review the EU loading density norms for poultry. Animal Welfare Foundation work regularly in Poland and have many contacts there. Together we will meet with the Polish authorities, to encourage them to interpret the maximum transport time for poultry in the same way as the Dutch authorities do- with waiting time at the slaughterhouse being included.
We would like to thank the first younger driver for being willing to partly open the tarps to let us check on the chickens. We would like to encourage this company to also load fewer birds per crate, expecially with hotter temperatures coming (it was 24 degrees in Poland already) and to insist that they install a water system for when they go on trips lasting 12 hours. We also encourage this company to invest in the future in crates with access doors on the side. 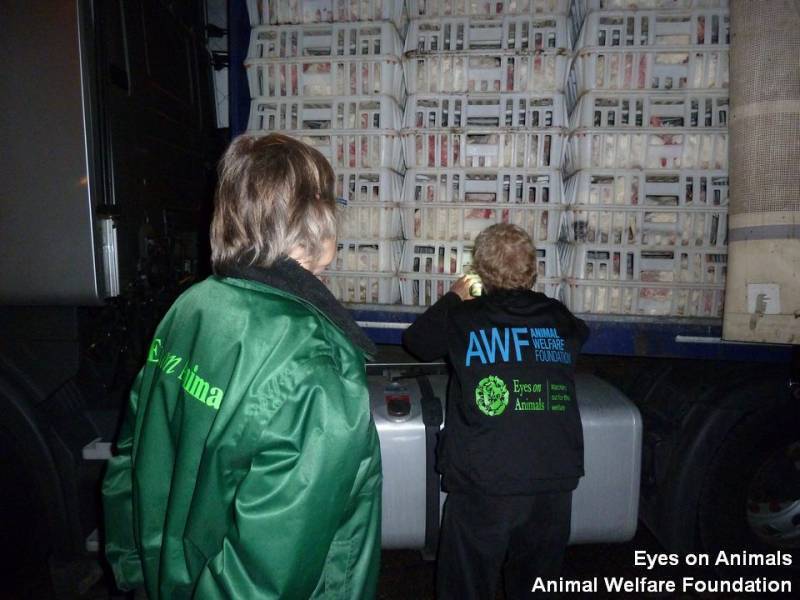 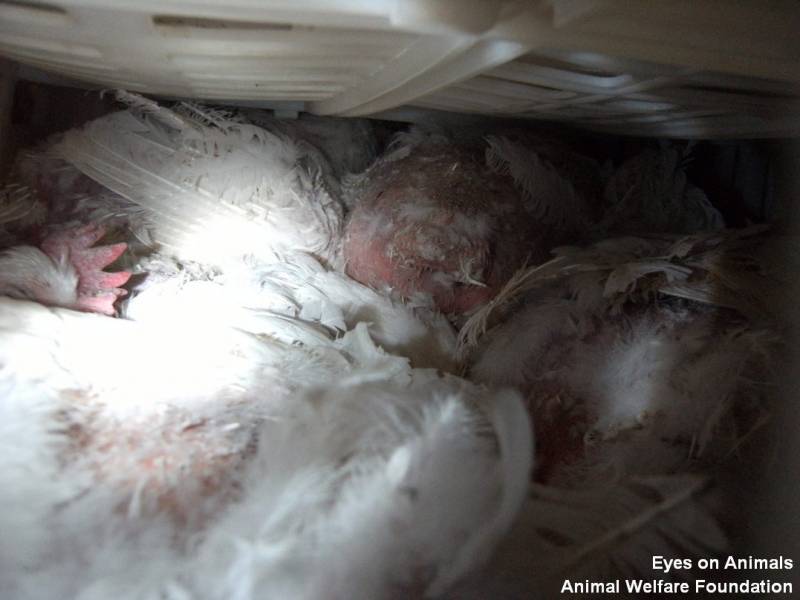