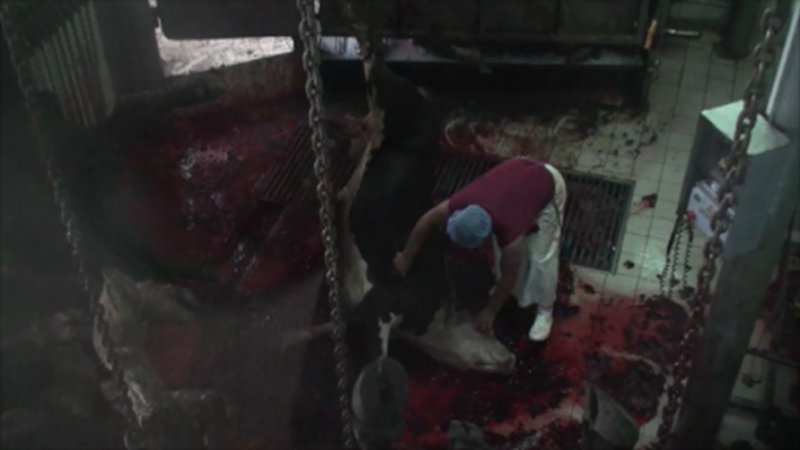 This afternoon we are invited to visit another Turkish slaughterhouse where many of the EU sheep and cattle were being slaughtered in since 2010. It is a large slaughterhouse. Conditions are alarming. The floor of the raceway is very slippery. There is a 90 degree angle that the cattle have to take to enter the kill box, resulting in them balking and even trying to turn around in the narrow raceway. When we arrive one bull had tried to turn around and got stuck. A worker was hitting him on the head with a stick. The bull was in panic. Once the bull enters the kill box, he can hear and see the killing process. The floor of the kill box is tilted like at the other plants, to force the bovine to fall down. The floor is so slippery and there is a gap in the raceway leading into the kill box- we see several bulls slip with their legs falling out of the gap. The bovine then has a chain placed around his leg and is dragged out of the kill box landing on a bloody kill floor. The slaughterman pokes deeply into the eyeball of almost each bull causing so much pain that the bovine stops moving his head. While he bellows out loudly from the pain, the slaugherman cuts his throat. The bull then scrambles to get up but the chain attached to his leg, within just 5 seconds, hoists him all the way up so he is hanging freely by one leg without any part of his body able to touch the floor. We have a long talk with the veterinarian. We express our concerns and discuss improvements, namely that he should have the gap sealed immediately to prevent the cattle from losing their footing and install more lighting so the bulls do not walk from the bright outdoor raceway into the dark kill area. He agrees and says he will do that. Cattle never walk from light to dark, and their balking causes frustration and consequently beating by the workers. We also discuss a better system to avoid the bovine being hoisted up while still conscious and suggest that they immediately stop poking the eyeballs. We are told that the employees can easily get hurt by a bull thrushing his head around, that is why they cause the pain in the eye. It immobilizes the head of the bull so the worker can get close enough with the large sharp knife to cut the throat. We understand that it is also very dangerous for the workers, but it is no excuse to justify poking the eyeballs. The veterinarian is fortunately very open to us and listens carefully. Despite the great suffering and panic we see here, we have good hopes to be able to work with the veterinarian to reduce suffering at least before the bovines have their throats cut. We will contact the director and suggest changes to put into place. We will also consider sending experts in cattle behaviour to help them modify the installations.