Today Eyes on Animals visited a Demeter dairy farm in Achterveld, The Netherlands. This farm is participating in the Louis Bolks´and Wageningen UR Livestock Researchs´ project “Familiekudde” (Family herd). This is a new dairy farm management system whereby the calves are kept with their mothers. For more information about this research project, you can read the report “Calf by the mother” published by the Louis Bolk Institute, click here for a copy.

The dairy farm we are at today has 45 dairy cows, but the farmer hopes to expand to 65 cows soon. The cattle are not de-horned. This does not create any problems, considering how much room and environmental enrichment the animals are given. The cattle are a cross between the Holstein breed and the Frisian breed, which makes them more robust and calm than pure Holsteins (which is a breed selected just for high milk production and as consequence has picked up undesirable traits such as agression and poor health). When the cows here are 2,5 years old, they have their first calf. On average they go through 3 to 4 gestation periods, and then at around 6 years of age are culled for slaughter. They are only slaughtered in the Netherlands, at a plant within 2 hours away. The female calves stay for 2,5 months with their mother and the rest of the herd. Afterwards, they are put through a very gradual weaning process of at least 1 month, so that they can slowly get used to living without their mother. The male calves are kept with their mother for 2 weeks and then brought to an organic beef farm down the road. 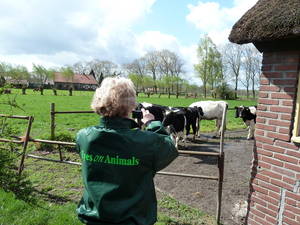 Milk production at this farm: While the calf is still suckling its mother, the farmer receives only 10-15 litres of milk per cow per day. After the weaning process it increases to 25-30 litres and then gradually lessens with time. On industrial-and even some biological run dairy farms where the calf is separated from the mother right after birth, the farmer receives 40-60 litres per cow per day.

The milk from this farm is sold under the quality label Demeter Zuiver Zuivel and is only available in Natural Food Stores. For people concerned about the suffering cows and calves experience on dairy farms when they are separated right after birth, this label is a good alternative. One litre of Demeter Zuivel Zuiver milk only costs €1, nothing to complain about and offers such a welfare advantage to the cow and calf!

We thoroughly enjoyed speaking to Gerard (the dairy farmer) and were very impressed with the condition of his farm, his animals and his attitude towards them. The cows and their calves enjoyed being in a herd all together, were given plenty of straw, back scratches and access to the outdoors. Although still a business, it felt like the animals had inherent worth and there was more interest in them than just what they can produce for us. Eyes on Animals wishes Gerard lots of success in the future and we will do our best to encourage as many people as possible to instead purchase milk from farms like this. 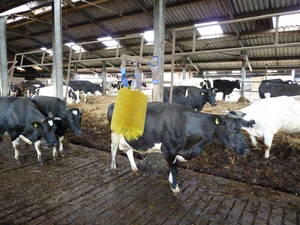 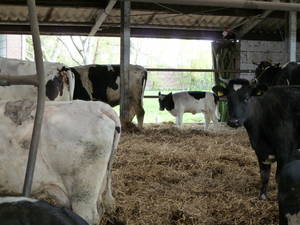 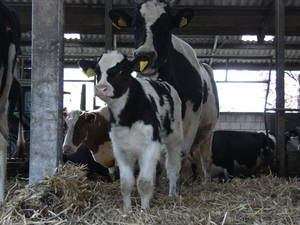