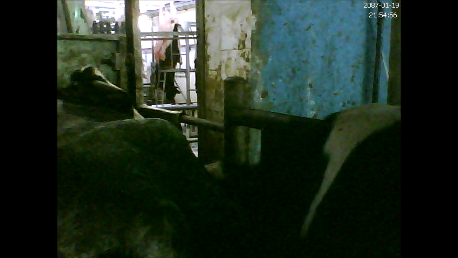 Today the EonA/AWF team observed the slaughter of cattle in a slaughterhouse in Turkey, known to be the final destination for many EU cattle. Today cattle originally from Australia and the Ukraine were being killed. As with all cattle slaughterhouses in Turkey, the animals are not rendered unconscious first. In fact, here they are put into boxes with a slanted floor causing them to fall down, and then are hoisted up by one leg via chains and then have their throats cut. We hope that one day all animals will be rendered insensible to pain before having their throats cut during ritual slaughter, but at the moment we are going to try to at least reduce the suffering occuring prior to being slaughtered. At this plant we explain to the veterinarians that they need to make the floor anti-slip. As well, they should not put 4 bulls into the raceway all at once, as they routinely mount eachother to form a hierarchy, which today resulted in many falling down and risking serious injury. The bulls were very stressed, and as the first one did not want to enter the kill box, the ones behind were beaten with a stick. The bulls could also see onto the kill floor and watch the cutting of the previous animals (see photo above), which is actually not allowed according to ritual rules. The veterinarians said they look forward to our report with recommendations. We will stay in touch and hopefully get concrete changes to the installations and improvements in the animal-handling to somewhat decrease the high-level of fear and pain these cattle experience here.