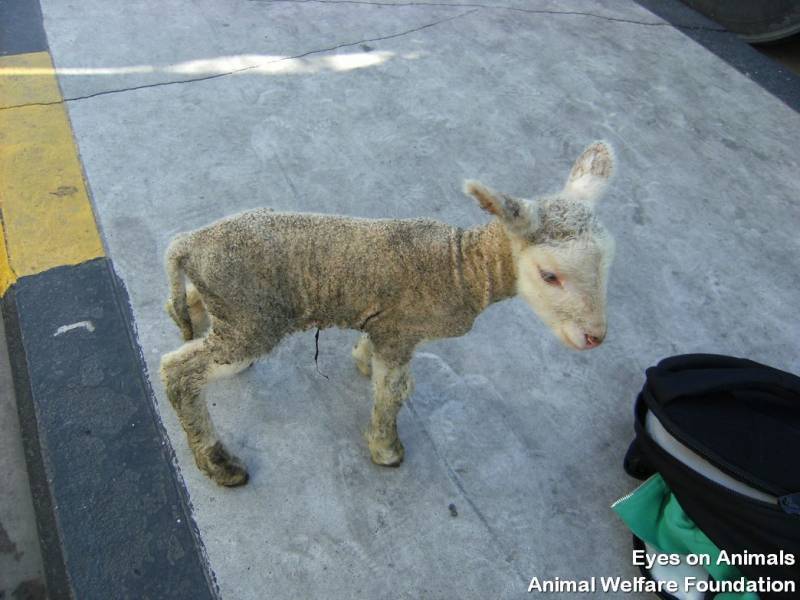 Today the team from Eyes on Animals and Animal Welfare Foundation entered the Duty free area of the border between Bulgarian and Turkey. We observe a parked livestock truck with pregnant sheep on board, from the transport company Torgyk Transkavics KFT. The sheep have been waiting on board here since last night. The truck is not allowed to move because of problems with the paperwork (only copies were available, but originals are necessary).

The chauffeur informed us that he left already Saturday afternoon (03.11.2012) from Budapest (Hungary) and his destination is Bursa, south of Istanbul. The sheep did not have water or food. The inside of the truck stunk very strongly of ammonia, which is of no surprise considering the hundreds of sheep had been on board for 2 days straight. We observed one sheep which looked as if she was about to give birth. Indeed, when we returned 2 hours later, 4 lambs had been born inside the truck! Fortunately we were present and could warn the drivers. They took out the lambs, otherwise these little newborns run the high risk of being trampled to death in such a fully-loaded truck. The mother-milk was given to the newborn lambs by a bottle. At the end of the afternoon the necessary paperwork was finally made available and the truck was permitted by the Turkish authorities to continue to its final destination.
Once again a perfect example why pregnant animals should never be transported on such a long route. Our teams have seen pregnant animals give birth during transit before on this route. Transport causes extra stress which can provoke pregnant animals, such as cattle and sheep, going into premature labour. Additionally, sheep that are too advanced in their gestation are still loaded because one cannot tell exactly how many weeks they are into their gestation at the moment of loading. We will continue to make the EU and Member State authorities aware of these incidences and strive for a stricter limit regarding the gestation stage of the animals. We will also send a complaint in about this particular consignment to the EU, the export country (Hungary) and the transport company itself.