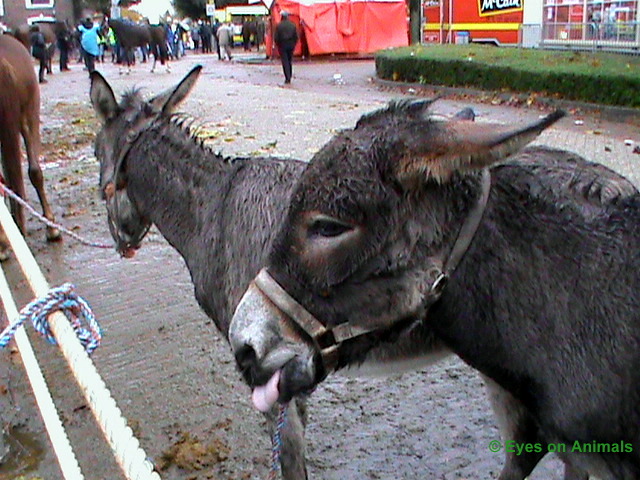 Bad weather conditions made ​​the stay on the horse market uncomfortable for the animals on November 4 2013. Due to limited staff, Eyes on Animals was unfortunately only present during the day: from about 13:30 to 17:30 hours. Eyes on Animals greatly appreciates the efforts of the market organization to stress the importance of animal welfare and compliance with the Protocol Welfare Horse Markets.

Over 1500 equines were present, but due to the bad weather, there were relatively few horses and people still left at the market in the afternoon. During the “market night” it poured almost continuously and there was a strong wind. During the day it still rained regularly. In principle, most horses can cope with cold fairly well, but long exposure to rain and wind without shelter or extra food makes it hard for them to maintain their body temperature. For young, older, skinny and unhealthy animals this is even more difficult. Especially since, in early November, horses have not yet developed a full winter coat and because they are tied up they can hardly move and many cannot ‘turn their backs’ on the wind and rain. This became evident in the afternoon: even horses that were in good shape could be seen shivering visibly.

Some of the horses that suffered from the cold had already been sold; others had not. In both cases it is advisable to encourage the owners to take their animals away or to offer them blankets. A new owner of young Friesian horses gave a good example: new blankets were bought on the market to protect his newly-bought animals from further cooling. It is also very important to provide roughage to these animals: the extra heat required to maintain body temperature uses extra energy, which must come from extra feed. Therefore, in the afternoon, Eyes on Animals provided horses with the last hay at the market in cases where the owner was not around.

This year there was a notable number of donkeys for sale at the market. Eyes on Animals would like to see horse markets take special measures to protect donkeys against bad weather, because their coats cannot withstand a lot of rain. Options could be: leave donkeys in trailers part of the time or build temporary overhead shelter to keep them dry. Eyes on Animals will propose this to all big horse markets in the Netherlands. It is also vital that, at the end of the market day, the organization makes available extra hay for the last animals.

In talks Eyes on Animals had with traders, transporters and visitors present on the market in the afternoon, people seemed more aware of the importance of animal welfare – especially compared to the first year, 2010, that Eyes on Animals inspected Hedel. This was noticeable from positive reactions Eyes on Animals received when giving hay to the animals. And also from the fact that people immediately offered assistance in helping some horses which were either disturbed by a horse next to them, bothered by their rope or which had broken loose. Eyes on Animals appreciates the efforts of the market organization Hedel to contribute to this ‘culture shift’ and to promote good practices. For example, following Eyes on Animals’ criticism of the recent horse market in Zuidlaren, the Hedel organization published an article on their website in which they warn they would be extra alert towards possible violations. Also in this article (clcik HERE to read it), people were made aware of the responsibilities they bear for ensuring animal welfare.

Unfortunately, there were still some horses and donkeys that were too skinny on the Hedel market. Veterinarians should be more strict in inspecting these conditions. The Protocol Horse Welfare Markets dictates that ‘neglected’ animals are not allowed on the market. Eyes on Animals proposes that the criterion of ‘neglect’ in this Protocol, should be better defined by the parties involved. Then it will become clearer exactly in which cases the horse markets Elst, Hedel and Zuidlaren can – and should – refuse ‘neglected horses and donkeys’ access to their markets. The same applies to horses or donkeys with insufficient hoof care and/or untreated skin diseases.

Finally, one key issue remains: Eyes on Animals would like to see Hedel and other horse markets put in place a system to register the ‘ownership’ of the horses and donkeys at the market. This implies that when a horse becomes sick or wounded, is shown to have signs of neglect or abuse, or is abandoned at the market, it is immediately possible to trace the owner. On some horse markets this is done with paint on the hooves or with ‘cattle markers’. 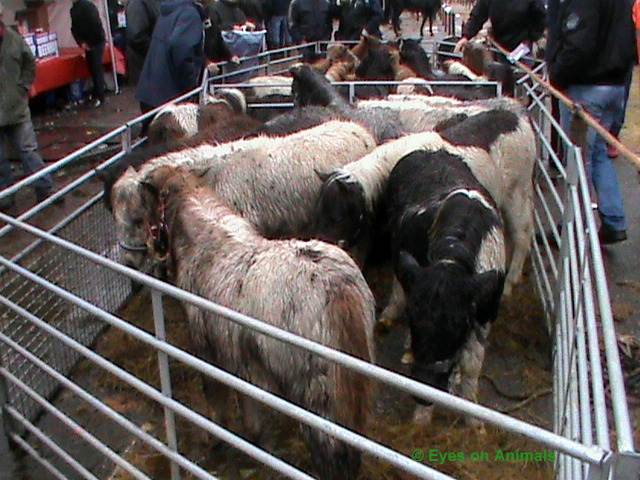 Holding miniature horses that are familiar with each other together in an enclosure is a good option at a market. It is hard to tie up these tiny horses ‘comfortably’ to a rope or bar that is more suited to tie up bigger horses. A rope that is long enough to allow them to eat, also holds the risk of ‘strangling’. A short rope prevents them from being able to eat, drink or lie down when they become exhausted. 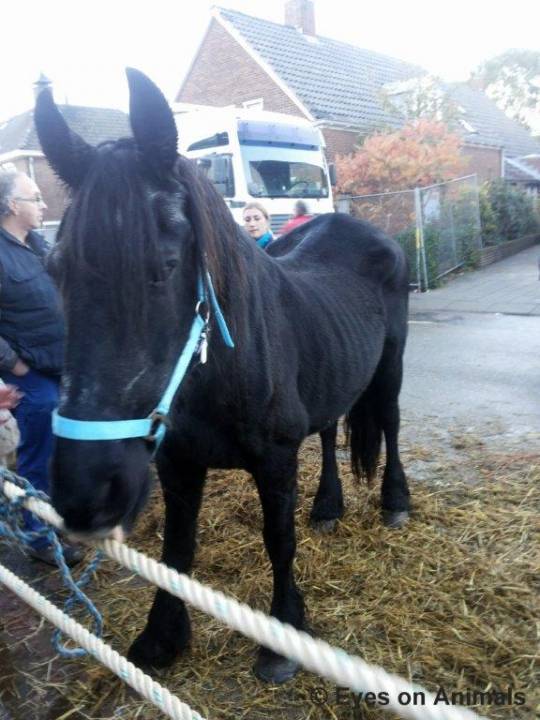 This 20-year old, friendly – and much too skinny – Friesian horse was for sale for a mere 150 Euro’s at the beginning of the market. At the end of the day, hungry and shivering, he had not been sold. The Market organization Hedel feared he had been abandoned. After their mediation, he was taken away – to be slaughtered. 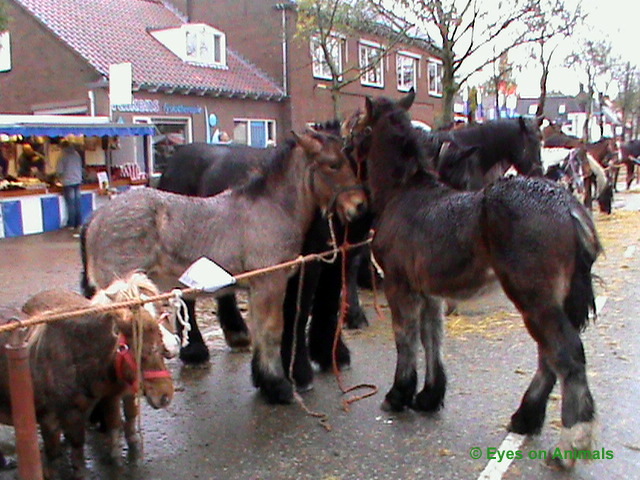 A great sight. Two draft horse foals whose tails have not been docked. Accompanying them, is an older mare who unfortunately does not have her tail anymore.