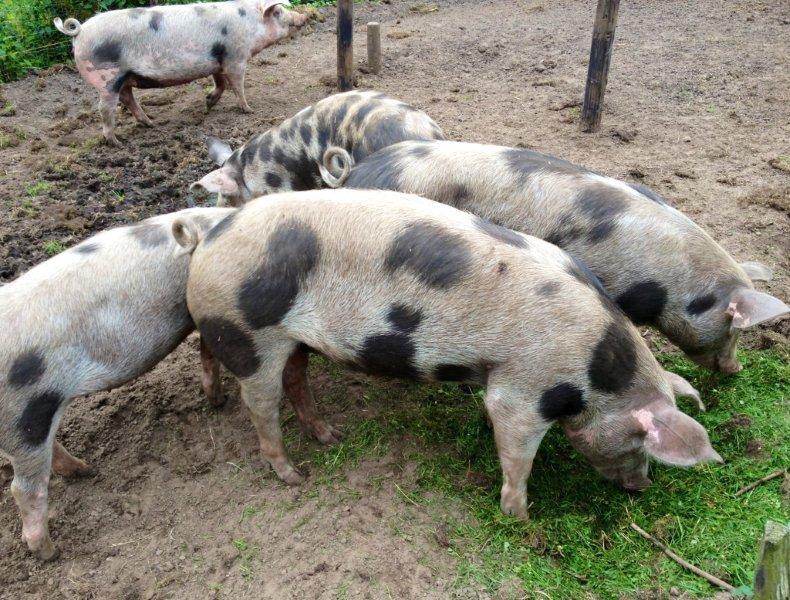 Today we went to the Dutch province of Drenthe, where we paid a visit to Hans and Anita Marskamp, who keep free-range pigs. Or rather, as they would say it themselves, look after pigs. It’s a small-scale farm. A number of pigs are bought as piglets and then fattened. Not up to a certain age, but until they have reached a certain weight, between 80 and 100 kg. The pigs are a cross breed of Pietran and Pied Bentheimers. The pigs roam around freely and their bodies are still intact. Problems with tail biting do not occur and there is plenty of space and enrichment. When they are fat enough, they are slaughtered by a local butcher and packed for the customers by the farmer herself. The entire carcass is used, nothing gets wasted.
There is high demand for meat from this farm; customers appreciate the fact that the pigs had a pleasant life. This farm is affiliated with Meat Your Own, a national platform that promotes another way of farming. On their website they write “Working together for honest farming, because meat lovers and farmers know that we must and can do it differently”. A problem for these small-scale farms is that the government does not actively support these initiatives and the costs of, for instance organizations like Varkensrechten and SKAL, are considerable. A shame that government gives subsidies for large “factory” farms and live animal export, but not for such positive initiatives like this farm! Hans and Anita are nevertheless fully committed to their choice to keeping the pigs like this. Beautiful to watch. We thank Country Smile for their hospitality and we wish them success with their pig farm, where the natural behaviour and intelligence of the pig are respected.

Eyes on Animals has filed an enforcement request with the minister of farming, nature, and food … END_OF_DOCUMENT_TOKEN_TO_BE_REPLACED