A while back Eyes on Animals paid a visit to a group-housing pig farm Den Elshorst. The owner of this small-scale facility is trying to make a living trough combining farming with tourism. The young farmer has worked with pigs his whole life and hopes his children will, one day, take over his small-scale pig farm. 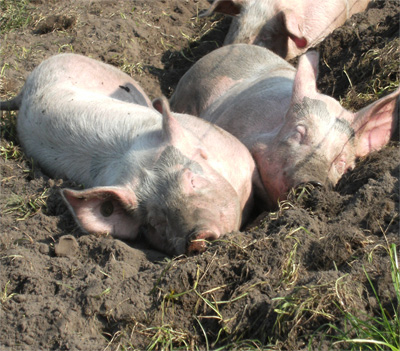 Having spent time working out the facts and figures this young farmer has come with a farming concept which works on both sides of the equation. The idea was simple: allow 8 pigs to grow up in relative freedom for six months and then take them to slaughter. Passers-by can then see the happy pigs playing in the outdoors and eventually sign up to order the future meat. Such meat is only available at certain pick-up points at the moment. Eyes on Animals agrees, as long as one chooses to eat meat, this is the way to do it, a method in which pigs get to exercise their behavioural needs and instincts in a natural setting. At the moment we see a number of collaborations between different producers in Brabant aimed at bringing local sustainable produce to the market. Distribution of sustainable meat might in the future be conducted using on-line stores, and once there’s enough demand more pigs may be allowed to live out their lives outside. So far, the concept seems to work and there are already 51 pigs living on the grasslands. The expectation is that by 2012 all of the Den Elshorst pigs will have been “converted” to free-range pigs enjoying these animal-friendly living conditions.

It comes further, as no surprise that new, innovative concepts such as this one may raise a few eyebrows and come across criticism. This became especially apparent when the municipality decided that the pig shelters, consisting of mud and soil, are to be considered “buildings”, and the state required for the open shelters to be fitted with air-filtering installations.

There’s also a bright side, the ZLTO (sustainable entrepreneurs), Brabants Landschap (Conservation), as well as various other businesses support this initiative. Support which even resulted in den Elshorst being nominated for an innovation award.  Klick here. 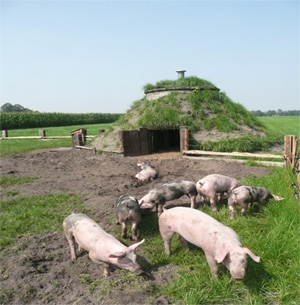 Eyes on Animals supports this initiative and sincerely wishes Ben, and his family, the best of luck. You can watch some footage of the happy Baarschot pigs on our Youtube channel.

Eyes on Animals has filed an enforcement request with the minister of farming, nature, and food … END_OF_DOCUMENT_TOKEN_TO_BE_REPLACED