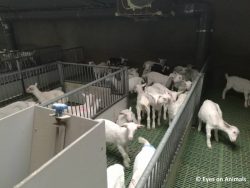 On July 13th we made an unannounced visit to the goat milk farm “Van den Heuvel” in North Brabant. The farmer and his wife were very friendly and gave us an extensive tour around the farm. In contrast to other goat milk farms – the kids born on this farm – are not transported to other farms at a young age but, are reared or fattened on the farm itself. This way kids do not come into contact with germs from other farms and transport at a young age is prevented. Eyes on Animals is of the opinion that by raising kids on the goat milk farm (instead of transporting them to external facilities) is a good way to reduce the high mortality of kids (especially the male ones), on the condition that the kids are given colostrum and good care.

Like at many other goat milk farms, kids are taken away from their mums straight after birth and placed in individual boxes.  After approximately 2-3 days they are brought to other stables to be fattened (male kids) or reared (female kids) as milk goats. The housing conditions for the kids were clean, but quite poor (no enrichment).  The housing conditions for the milk goats were good. The barn was well ventilated and had a lot of daylight.  Besides, the goats were kept on a thick layer of straw. Unfortunately there were no facilities for the goats (young and old) to climb, even though it is known that goats love to climb. Hopefully the farmer will give this idea some thought.

We would like to thank the farmer and his wife for giving us such an extensive tour, answering all of our questions and allowing us to take photos.