Today the EonA/AWF team attempted to do a follow-up check on the farm owned by Agrarcoop in Hungary.

Agrarcoop is a large Hungarian company that fattens calves and exports cattle of all ages to slaughter and for further production, including to Turkey. In 2012 we visited their farm/export station and noted some positive and negative observations. Of big concern were young calves being housed in individual wooden crates. These crates were banned in the EU already back in 2006. 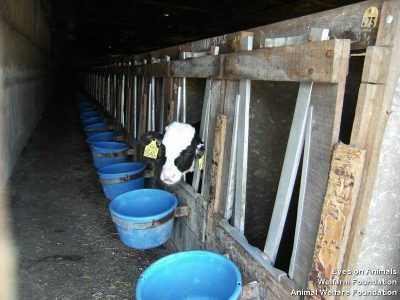 Today we wanted to see for ourselves the steps taken. Unfortunately we were not allowed in to check and were told we have to wait for permission from the boss. We spoke on the phone to the assistant who insists that the changes were made but have not received a reply yet to our request to visit the premise to see this positive step ourselves. We can only report on things we have seen with our own eyes, and thus will insist on visual confirmation.

Should we not hear back from Agrarcoop we will alert the authorities again.