During the week from July 6th to 12th, Eyes on Animals, together with two other animal welfare partners (CIWF and AWF) carried out an intensive investigation of livestock trucks transporting cattle and sheep from all over Europe across the border into Turkey. This inspection and its´ findings received extensive media attention.Day 6: in the morning of this last day of the investigation the three teams met to collect all the gathered evidence they had accumulated over the previous five days. This evidence will be transfered into structured reports and film imagery. 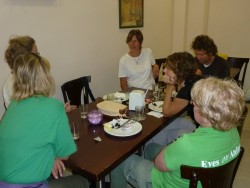 In the afternoon the teams held a meeting with the head of the Veterinary Services on the Bulgarian side of the border. The teams´ observations and concerns where discussed and we gave recommendations for what was needed to curb the horrible amount of suffering taking place at this border. According to the Bulgarian veterinary officals, the major problems lie on the Turkish side of the border where there are long delays if problems in the paper work are detected.

However, it is clear that both sides of the border are equally unsastisfactory and need urgent measures to be introduced. The transporters of livestock across this border are clearly not adhering to the rules and regulations under EU law and thus should not be accepted at all by the Bulgarian border inspectors.

Arrangement are underway to send all the reported incidents of animal welfare violations observed during this inspection to the Bulgarian Ministry and the EU. To watch a documentary (in Dutch) about this investigation, broadcast on 29.07.2011 in the Dutch news show “Uitgesproken”, see the next post.

Eyes on Animals has filed an enforcement request with the minister of farming, nature, and food … END_OF_DOCUMENT_TOKEN_TO_BE_REPLACED