Eyes on Animals spent the entire night checking on national Dutch livestock trucks on the highways. Late at night we spotted a parked livestock truck from the company Vermeulen, loaded with pigs. On board were boars of approximately 5-6 months of age. Several compartment were very crowded, others had acceptable loading densities. In the crowded compartments the animals were busy fighting with eachother, very badly. They had likely been mixed right before being loaded, and as they did not know eachother were trying to establish their ranking order on board such a crowded and hot truck. One boar was panting very heavily and was bleeding from his mouth- he appeared in great stress and was being bitten repeatedly by another. 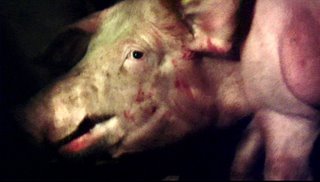 Eyes on Animal called the AID to ask that they send an official inspector to the scene, but unfortunately they could not come. They reassured us that the boars would be checked by a VWA (ministry of agriculture) veterinarian upon arriving at the slaughterhouse. But we remained concerned as we know well that there is not always a veterinarian present during unloading, andnot always one motivated enough to take a close look at the problem. Eyes on Animals will send the footage and a letter of complaint to the transport company and to the Dutch authorities. It is well known that pigs fight more in a parked vehicle than a moving one. Chauffers should load the pigs later in the night at the farm and then go directly to the slaughterhouse instead of loading the pigs early and then parking for some hours to get some sleep beflore the slaughterhouse opens.Fighting among pigs remain a serious welfare problem during transport and can only be prevented by loading pigs together that were raised together, separating the bullies, and assuring that the driver keeps driving instead of parking the vehicle for a couple of hours.