Newest film showing the latest situation at the border from June 23-27, 2016

Press release 19.02.16 Eyes on Animals: the presidency of European Council is The Netherlands; it is time to act. 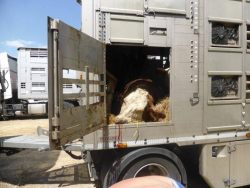 A five years investigation conducted by Eyes on Animals (NL), Animal Welfare Foundation (Germany) and Tierschutzbund Zurich (Switzerland) at the EU/Turkey border has shown that as many as 70% of all inspected livestock trucks from EU countries to Turkey violate the European Regulation EC 1/2005 on the protection of animals during transport.
Eyes on Animals’ director Lesley Moffat: “Unfortunately based on our investigation we have to conclude that these violations are systematic, causing tremendous suffering of tens of thousands of animals. With the Netherlands profiling itself as a positive role model in agriculture, which was stated by secretary Van Dam in the European Parliament, The Netherlands needs to take the right action as EU President and stop this continuous animal abuse’.

During the time period of the investigation, from 2010 until 2015, the EU exported over 900.000 sheep, 850.000 cows and 5000 goats by truck on long-distance journeys to Turkey. In 2015 the export of live animals rose with 39% compared to 2014 (source: Eurostat). For 2016 the EU plans for a further increase. Together with two partner organisations, Eyes on Animals regularly inspects long-distance animal trucks passing the EU border into Turkey in Kapikule. 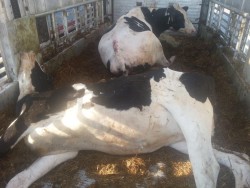 Lesley Moffat: “We see violations of animals being left on board for far longer than the maximum-allowed times, unrealistic journey times, false declarations of resting hours, animals suffering from extreme temperatures, a lack of water and food, overcrowded conditions on the trucks, lack of clean bedding, insufficient height and serious injuries due to poorly-designed equipment in the trucks, such as partitions with large gaps. More over many drivers are incapable and lack the skills needed on how to handle animals. These transport journeys are a true nightmare for the animals. Sick and wounded animals, animals giving birth and dying animals are deprived from care. We regularly see dead and trampled animals’.

The results of five years of investigations are captured in a report of over 1000 pages and an edited film, which will be presented to the EU-commission and its state members. 352 livestock trucks were inspected of which 247 transport companies from 13 different EU countries violated one of more laws of the EU Transport Regulation 1/2005. Moffat: ‘Not one of the 13 exporting EU-countries complied with the law. There is just no excuse for this’.

European Court of Justice: Comply with the law 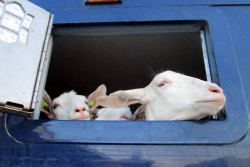 Last year the European Court of Justice confirmed that the EU Transport Regulation on animal-protection is applicable during the whole time of travelling: from the place of departure to the final destination, even if situated outside the EU in a Third country. With the Netherlands being EU President, Eyes on Animals asks State Secretary of Agriculture Van Dam to commit to this law being respected. The declaration confirms that national authorities that approve the export of live animals need to apply and uphold these laws. ‘The Netherlands exports a relatively small number of live animals to Turkey compared to some of the other countries, however it is home to many livestock transport companies operating on this route, that pick up animals from other EU countries and bring them to Turkish slaughterhouses, feedlots of farms (cf report).

Eyes on Animals and its partner organisations accuse the EU-commission for tolerating the systematic violations of the law. The EU stimulates the international trade of live farm animals, and does very little to secure adequate infrastructure and resources to protect the welfare of animals during transport. Lesley Moffat: “It is unacceptable that animals depend on us non-profit organizations being present at the border for their protection. We do what we can, give first aid to suffering animals and send proof of violations to the responsible livestock transport companies and competent authorities, but it is the EU that should take on its responsibility in this. They are not only responsible for stimulating international trade of live animals on this route, but also responsible for the animals being given the care and protection that is stipulated within the law. ” 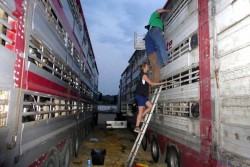 After years of negotiations, the EU finally succeeded to persuade Turkey to import animals from the EU in 2010. However, no provisions were made to take care of the EU animals during transport. At the border, there are no stables to unload, water or feed the animals. ‘The animals are stuck in the trucks for hours or days under extreme temperatures waiting because paperwork or health statements are often unclear. Turkey does not have an authority to uphold animal welfare legislation and the EU does not have the authority to check and fine those who violate these laws abroad. According to Moffat, the EU is well aware of this serious problem: ‘The EU lacks the political will to act; EU-members want to get rid of ‘surplus’ animals on the internal market to stabilize the price of livestock.

Ban this illegal trade in animals

The animal welfare organisations call for a ban on the long-distance transport of animals from the EU to Turkey. ‘Aside from the systematic violations of the EU transport regulation 1/2005, this trade is also in conflict with paragraph 13 of the Lisbon Treaty that obligates us humans to provide for the welfare needs of animals as ‘sentient beings”, says Moffat. According to Eyes on Animals and its partner organisations neither the EU-commission, the EU-members or the Turkish authorities, nor the im- and exporters of animals are willing to ensure that this international trade complies with the law. Moffat: this means this is an illegal trade and therefore has to be stopped”.