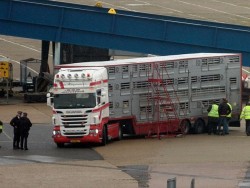 Eyes on Animals just received the original paperwork of a consignment of sheep that a Dutch transport company tried to export from the UK to the mainland in July 2014. During this month, live exports of sheep from the UK to mainland Europe increased dramatically over a 4 week period due to the exporters supplying the ever increasing demand for live animals for the Muslim Festival Eid.

Diepeveen knowingly rented a trailer that was not acceptable. The trailer Diepeveen hired is not approved to transport sheep by the competent authority, it is only certified to transport cattle. This led to a huge compromise regarding the welfare of the sheep loaded on 3 levels inside. In addition, the sheep were seriously overcrowded. From the photos below, you can see the conditions faced by the animals. Limbs were getting trapped in between the outer and inner skins of the trailer and between the venitlation bars.

From the paperwork we saw that the trailer had been loaded with 627 sheep. These animals were classed as ‘small, less than 26kgs’ to allow the loading of more animals. The photos of the animals involved that day are pictured below and numerous experts we have approached have confirmed that they are above 26kg. In any case 627 sheep is unheard of for a Pezzaioli trailer of this sort and not in conform of the EU loading densities. 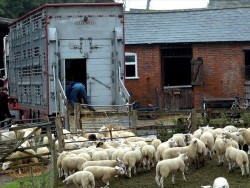 The UK authority APHA (formerly AHVLA) approved this shipment at point of loading, it was not until the truck arrived at the Port, some 13 hours after first loading that the trailer was refused to sail on Onderwater’s Ro-Ro barge, ‘Joline’. It was pointed out by the RSPCA (the charity is allowed to observe the portal inspections but is not allowed to approach the trailers or animals) to the APHA that there were legs protruding from the trailer, it was at this point the trailer was refused onward shipment and transferred to a local farm where the animals were unloaded.