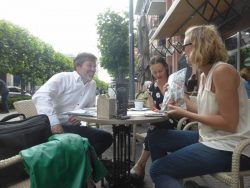 Good news! Yesterday we met with the General Manager of Rondeel, a company that runs four chicken-farms in The Netherlands and produces eggs and poultry-meat according to higher welfare standards. He agreed with our idea to use the much more gentle method of chicken-catching, called “The EonA Dutch Method” next time they will empty out one of their barns. Eyes on Animals introduced the EonA Dutch method to the Netherlands’ poultry industry and is now stimulating it to be adopted in practice. During the EonA Dutch Method, birds are not grabbed roughly by their legs and hung upside down, 5 per hand and then stuffed headfirst into transport crates as in the conventional method. They are rather picked up maximum two at a time, in an upright position with support under their chest and then placed upright and calmly into the transport crates. The birds suffer a lot less stress and pain this way. The General Manager of Rondeel admitted that the EonA Dutch Method of showing more 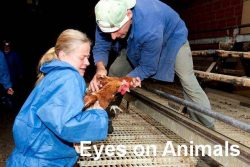 compassion to birds during catching and loading suits their company’s philosophy of respecting animals. This is an exciting step that Rondeel has agreed to take, being a pioneer in this movement and setting a good example for other players in the poultry-inudstry to follow. Rondeel is a begin for us, in the near future wil also want to make the EonA Dutch Method mandatory within the Beter Leven 3 star criteria. Thank you Rondeel for your courage and willingness to take this positive step!