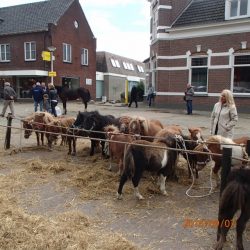 Today one of our inspectors visited the yearly horse market in Elst. Due to circumstances EonA could not arrive at the beginning of the market, but only at 12 pm. Many of the animals had already been sold and were gone. Unfortunately, this means we could get only a very limited impression of the welfare circumstances at Elst.

The total number of equines offered for sale at the market had been 1245; again slightly fewer than last year. The lower numbers is a trend also visible in previous years and on other markets.
This year the wooden posts had been properly secured and could not be pulled up by the horses. This is an improvement to last year and we are pleased that the market managers acted on our suggestion. The ropes were partially single and partially double. With the double ropes, again a part was quite limp so the horses could easily step over it and risk injury. The organizers of this market have been made alert of this concern.

There was plenty of hay, water and buckets, which were used to distribute water to the animals. Fortunately, it wasn’t very hot outside and the music on the market was not set loudly.

EonA also observed the handing of the horses during loading. It went quite smoothly. At 3 pm all the animals were removed from the market. This was remarkable because the market officially lasts until 4pm. EonA is pleased with this, because the shorter the market is, the better for the animals. However, as said earlier, we could not observe the beginning of the market and the arrival of the horses.