Pinky was destined for the slaughterhouse after having been used in an “education project’ at a Dutch school. The 21 piglets she gave birth to during the school year had already been transported to slaughter. Pinky was to face the same fate. 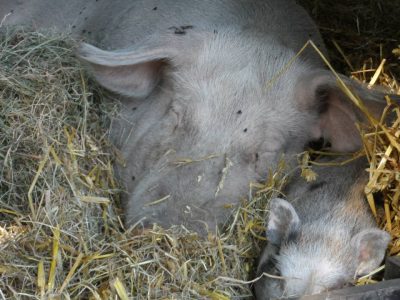 Students Maartje and Noah could not face that Pinky, a perfectly healthy and loving sow, was going to be slaughtered and then replaced by a new pig at the start of the next school year. A rescue operation was set up.

It took quite some time, but after a tip from the Dierbewustleven Foundation about the ‘t Dierenduintje in Castricum, Fred and Willa of the children’s farm offered Pinky a loving home.

All that is well, ends well? Fred and Willa wanted to give her the best possible home, but Pinky didn’t really seem to appreciate it all that much.

This big, and every now and then in heat, lady broke down the place and demolished the fencing on more than one occasion. At their wits end, after the umpteenth incident, an important decision had to be made. Either ‘t Dierenduintje had to adjust Pinky’s housing in such a manner that breaking out was no longer a possibility, or Pinky would have to move again.

But what fate would await Pinky then? The risk that Pinky might still end up at the slaughterhouse was one Fred and Willa were not willing to take.

So after careful consideration, it was decided that Pinky’s accommodation would be fixed up with money that basically wasn’t there. Money that was highly needed for other things at the children’s farm. Foundation Dierbewustleven has a special place in their heart for ‘t Dierenduintje  and, therefore, offered to help raise funds to contribute to the costs of building the new stable.

Eyes on Animals, impressed with the dedication and motivation of the people involved in this rescue action and pleased to hear that Pinky´s dignity and fate were being respected, donated 200 euro towards her new home.

For more information or to make a donation to Pinky, visit HERE