Today we dropped by Janssen Neerkant’s pig collecting and export centre in Brabant (NL). The purpose of our visit was to take photos of their new 17-meter loading ramp. Because the ramp is so long, the pigs no longer have a steep climb into or out of the truck, even from the fourth floor of the vehicle. Because pigs are bad climbers, this is a very good improvement to their welfare during transport. As well, it means that pigs that have injured a leg during transport to the centre do not have to tumble-down a steep ramp but can take their time. We are going to show this photo to other pig collecting centres and slaughterhouses as a good example to follow. 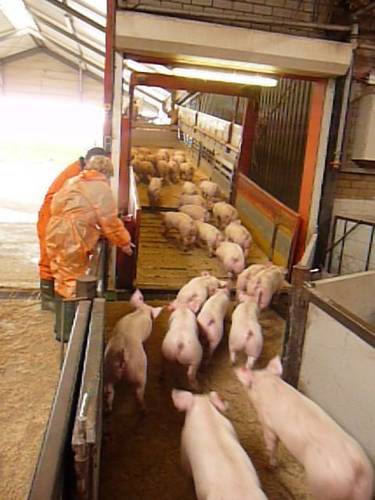 Nevertheless, it was not all positive during our stay. Upon arriving we observed two-drivers from the pig transport company Hekers and Koppen categorizing piglets into size and one of the men handled them very badly. He would pick the piglet up and literally drop him/her over the side of the gate. There was no care into how the piglet would land nor any concern for the fact that the piglet would fall 1.5metres to the ground. It is no wonder that we observe animals with leg injuries on board transports!

Eyes on Animals expressed this concern to the manager of the centre and asked that he have a word with the company. We will also send a letter to the boss of Hekers and Koppers about our observations and, if necessary, take other action so that this kind of behaviour is stopped.

The long and wide ramp at Janssen Neerkant’s centre reduces stress during loading and unloading. 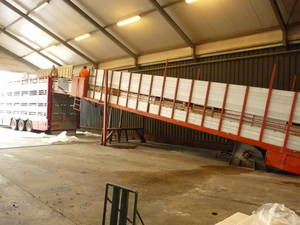