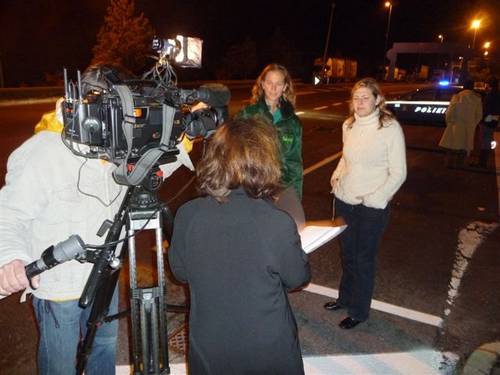 The Canadian TV team that documented our TASKFORCE meeting and tours also wanted to show the difference between livestock transport legislation in Europe from the much outdated rules in Canada. Eyes on Animals saw this as a great opportunity to put more pressure on the Canadian government that still accepts, for example, that cattle be transported 52 hours without water, and pigs 36 hours (double to four times longer than the European rules)! We therefore organized a night of livestock truck inspections on the highway and asked the official veterinarian inspector and the police at the busy border between France and Italy to illustrate how the EU law can be enforced. Three Italian livestock trucks with French cattle were stopped in the early morning. One was overloaded with 5 cattle, and was given a fine of 3000 euros. The Canadian television team filmed the inspections. Eyes on Animals explained to the camera the EU requirements regarding animal transport and, together with CETFA (Canadian Ethical Treatment of Farm Animals), also the importance of getting the Canadian highway police involved so that there is more surveillance of animal suffering during transport there.

Eyes on Animals would like to say a big thank you to the official Italian veterinarian and the highway police for allowing the camera team to film, and for being so passionate and professional in their job.

Checking on the loading density and condition of the cattle. 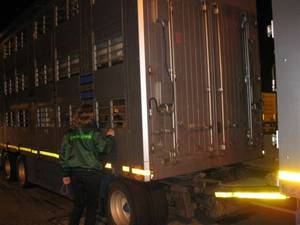 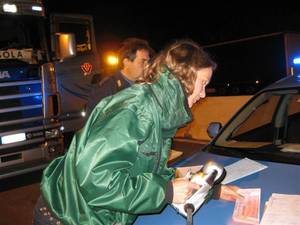