Today a team from Eyes on Animals, together with Vroege Vogels Dutch radio, made an unannounced visit to Weidemark slaughterhouse in Soegel, Germany. We wanted to check if Dutch pig-transport companies were respecting their own new “Heat Protocol” guidelines which require 10%- 20% lower pig density levels when it is very hot outside (27 degrees for a period of 4 days or one day of above 30 degrees). We had also been hearing that the waiting lines can be very long at this plant, with the pigs having no choice but to wait on board as the lairage of the plant was often too full. 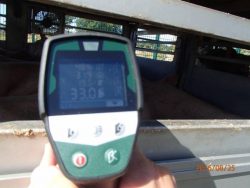 The outdoor temperature was 32 degrees at 10am when we arrived. Already there were many Dutch pig trucks waiting, parked on the side streets of the plant and some inside the premise, several in the full sun. We measured temperatures in the pig trucks of 33 degrees and most of the pigs were panting, some were fighting, and one had his face aligned in front of the fan in order to cool down. Fortunately three of the 8 Dutch livestock trucks that we checked on had loaded fewer animals than during normal temperatures and the difference could be seen by the behaviour of the pigs inside. But it was a shame to see that the others were fully loaded, with 205-206 pigs on board each, which is a density norm meant only for cool days. The transport companies really must do their part by giving the pigs more space during hot days, but we also met with the slaughterhouse director and manager of the lairage to see how the slaughterhouse could do its´ part. 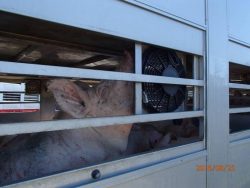 Slaughterhouses need to provide infrastructure to handle risky situations like heatwaves. At Weidemark, 70,000 pigs are slaughtered every week. Due to the enormous volume, the logistics are hard to manage precisely, leading to many livestock trucks having to wait for sometimes even 2 hours and more before they can unload the pigs into the lairages. For this reason we asked Weidemark to invest in more infrastructure. They have now purchased industrial mobile fans to set up along the parked livestock trucks, in order to guarantee a constant flow of wind to the animals and have started plans for a parking area for trucks along a shady tree-line near the entrance of their plant. Here there would be room for 10 livestock trucks to park in the shade where there is fresh wind. We are very pleased that Weidemark has agreed to take these two measures for now, but will continue to insist that large slaughterhouses like Weidemark increase their lairage capacity, so that live animals do not have to wait on board parked trucks. Weidemark assures us that it is in their plans to increase the size of their lairage capacity to overcome this problem. We will stay in touch with them and conduct a second inspection during the next heat wave.

To listen to Monique and Lesley from Eyes on Animals on Vroege Vogels Radio, click HERE.