Home » Our inspections » Inspection of chicken-catching in Woudenberg, the Netherlands 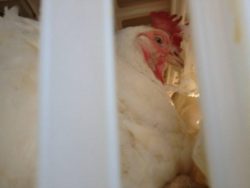 Eyes on Animals conducted an inspection of chicken-catching at a breeding-hen farm in The Netherlands. Tonight two poultry-transport trucks and a catching team showed up to load all the birds and send them to slaughter in Poland. The handling was rough. The birds weighed 4.2 kg each. The catchers grabbed them by their legs and hung them inverted, two birds per hand and then stuffed them into crates. The birds in the crates were so crowded but still within the “bogus” EU norms so we cannot do anything..sadly these practices are standard still with no one in the chicken industry setting their own better catching- and density standards. But what made tonight worse than other inspections was that a stack of poultry crates, each one full with chickens, tipped over while they were trying to place them on the truck. One crate fell all the way down to the ground. The birds were screaming and there was suddenly lots of blood. The bottom of the crate was full of blood. Many of the birds were injured. The catchers then just restacked the crate back onto the truck without even checking or helping the birds inside. The farmer sawit all but also didn’t take any action. It was only when we told the catching-crew leader that it would be bad for the image of the chicken-catching company if he didn’t unload that crate to check on the birds that he took action. He approached the two young men stacking the crates on the truck to unload the crate with the injured birds. The two young men literally whined saying it was not necessary… they even lied saying there was no blood. The leader of the crew then removed one bird that was now dead in that crate and put the crate back on the truck as the others were ‘still alive’. The farmer was concerned about the “4 kilo” of meat now lost. No one in the catching crew also checked that the birds did not have any protruding toes or wings duing stacking of the crates either. In general this catching-crew and the farmer made a very unprofessional and emotionless impression.
Tomorrow we are going to drive to the catching company office to have a word with the boss and propose our welfare- training course. Depending on their attitude we will decide what further action to take on this matter and if we make the names public or not. In any case, we have sent an official complaint to the Dutch authorities about this incident.
We hope that industry players will cooperate to put improvements in place and stand up for professional treatment of sentient beings. We want to build bridges so suffering can be quickly reduced without wasting time on argueing. But it all depends now on them if they will cooperate.