Home » Our inspections » market » Inspection of a livestock market in Belgium 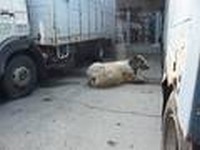 Eyes on Animals inspected Ciney market today, one of the largest markets left in Europe. Today there were 2500 cattle and several equines for sale. Positive aspects were the presence of water troughs in every loading bay, the fact that the animals were tied on properly (not around their horns or neck as is often the case at other markets) and that we did not observe any beating.

Negative points were that the floor of the main corridor is very slippery and several animals in very poor condition were present. We were very upset that they were approved on the market by the veterinarians, and worse, allowed to be sold and further transported to slaughterhouses afterwards.

Two adult cattle; a “culled” dairy cow and a large Belgian-blue bull  had had a hoof amputated, and as a result had seriously infected and swollen stumps . Blood and puss were dripping out. Both animals were not putting any weight on their injured leg and showed signs of suffering a lot. When the dealers tried to load the bull, he could barely walk and eventually fell down.

EU legislation states that only animals that can walk unassisted without pain be allowed to be transported, and therefore the veterinarian and market authorities should never have accepted these animals for sale but instead had them euthanized and the transporter and keeper fined.

As well, there was one calf that had crippled hind-legs  apparently from a lack of vitamin E. Although he did not seem in pain (he put pressure on all four legs), he did have trouble walking and one had to wonder if he could withstand transport without falling down. During loading, this poor animal fell down and was not able to get back up. Our report and photos are being sent to the Belgian and EU authorities as well as the market authorities. We will demand improvements and that measures be taken so that the veterinarian does not accept such animals again in the future.