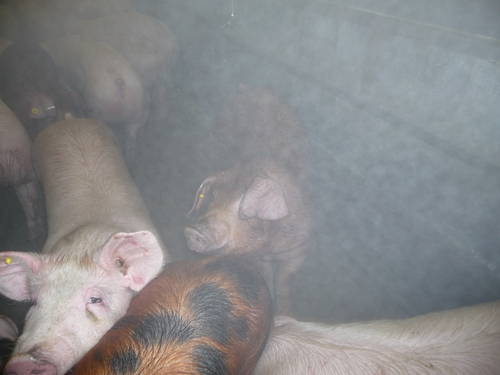 Eyes on Animals inspected a pig slaughterhouse in Gorinchem, the Netherlands. The director is very involved in projects to improve animal welfare. Instead of insisting that all male pigs arriving at his plant be castrated (as almost all plants in Europe, Canada, USA, Australia and China do) he has given farmers the opportunity to no longer castrate their males, by having employees at his plant sniff the meat from their boars to be sure that they do not have boar taint. Should they have boar taint (only 1-2% of boars actually produce this smell), the farmer is still paid and the meat is prepared differently.

The pigs are stunned here using CO2. The pigs are moved in groups of about 8 into an open “elevator” and brought quickly down 5 metres below into high concentrations of CO2. It takes approximately 8 seconds for the pigs to breathe in enough CO2 to fall down unconscious. These 8 seconds are short but do cause stress; some screamed, others trembled and fell. However, the process before being stunned is much calmer as in slaughterhouses that use single-file electric stunning systems. Pigs are less nervous when moved in groups. The employees did not rush the pigs nor kick or hit them. Electric prods are not permitted. And unlike the pigs stunned using electricity, the pigs coming out from the CO2 were all unconscious. Eyes on Animals has unfortunately seen in the past many pigs not properly stunned using electricity as there is often a fault in the stunning prods or in its application.

Needless to say, it remains uneasy to promote any system of stunning pigs as they all cause animal suffering. The question is which causes the least amount? And have we done enough research and is the industry prepared to spend more money to find the most painless method (perhaps using other gases considered less aversive to pigs?).

The floor of the waiting pens is heated, and fortunately none of the pens were crowded as we have seen at other plants where the pigs have no room to move and start badly fighting one another from the stress.

We did have two welfare concerns though that could easily be solved: 1. the “elevators” had an opening that was too large, so that one pig during our visit got her head caught and caused her to panic and 2. The pen where the sick animals are gathered to be inspected by the veterinarian was right beside the garage door opening, where lots of cold air came in. The 4 sick pigs lying there were shivering. We proposed that he seal the elevator opening, and asked that the walls of the sick pen be solid (so as not to let any draft in) and that these animals be given straw to lie on, to provide at least some comfort during their last hours. The director was very open to our suggestions and says he will act on them. Eyes on Animals will stay in touch to monitor progress.

We would like to thank the director for being so sincere in his interest to do things correctly to best reduce animal suffering during slaughter.