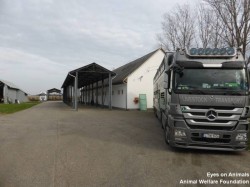 Today the EonA/AWF team worked with the border police and official veterinarians to check on livestock trucks both passing through the border between Hungary and Romania and at the two control posts in the area. We were pleased to find conditions all OK and within the legal norms today.

A truck from the Hungarian company Bozso Lazlo, transporting pregnant heifers from Lübeck, Germany and heading to a dairy farm near Ankara, Turkey was checked at the border. The two drivers were very cooperative and had prepared for the journey properly. The water tank was full, there was plenty of clean straw bedding, extra feed was stocked in the swan neck, they had a ladder and large water troughs with them, the automatic water troughs worked, the loading density was acceptable and even the headspace on the top floor was sufficient. The drivers helped us measure this. the truck also had several large access doors, to properly inspect and provide for the animals on board. They had planned a 24 hour stop at a control post in Romania. Although transport is a stressful event for animals, we at least are happy to see that these transporters took care to do things carefully and professionally.


There were three Hungarian cattle trucks at one of the control posts resting the German heifers they had had on board and were bringing to Turkey. The company was Ko-Kavics. The cattle and the conditions inside the control post made a good impression- plenty of bedding and feed and water.
At the other control post piglets from Denmark had been waiting for the past 10 days inside the barn. The Danish transport company Scandi had had logistic problems – apparently the ship they were supposed to take across the Black Sea towards Armenia had been cancelled and the next ship was available only 10 days later. The piglets are destined for a fattening farm in Armenia. The best solution was for the piglets to remain at this control post to wait it out, where they had warm bedding, shelter and feed and water. The condition of the piglets was good.
Both control posts are now certified by the official veterinarians against bluetongue disease and are open to rest animals on their way to further destinations (eg. Turkey). The control posts had been modified to prevent the spread of bluetongue disease which is currently present in this area- mosquito nets had been installed and medical lotion is spread on the cattle arriving.

We enjoyed working with the official veterinarians and meeting for the first time the Animal Welfare Officer of this region, who proved to be very motivated. We made plans to work together again in the future. We would like to also thank the owner of the two control-posts for taking proper care of the animals at his facilities.

Eyes on Animals has filed an enforcement request with the minister of farming, nature, and food … END_OF_DOCUMENT_TOKEN_TO_BE_REPLACED