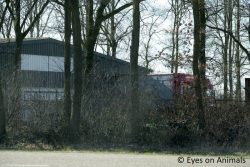 Today we inspected a collecting center in Brabant. There were hundreds of kids (baby goats) present, destined for France. The kids were brought in small trailers and some in a bigger truck from the company Busser. Unfortunately we were not able to observe the conditions inside the collecting center closely because the owner asked us to leave his premises due to public health reasons. The kids were picked up by a forced-ventilation truck from the company Hunland and loaded on four levels. We will contact Hunland about the conditions during transport. We regret that such young animals, just born and still dependent on milk, are transported all the way to France only to be slaughtered.

In the coming months we will try to get more information about these transports and revisit the collecting center.