Home » Our inspections » Inspection catching and loading at Wingens’ broiler-farm

Today, on invitation by Rob and Egbert Wingens, two brothers who own a broiler-farm in Schaijk (NL), we were given the opportunity to observe both the catching and loading of broilers at their facility. The broilers were loaded into Stork containers of 4 trays high. The broilers were destined to be slaughtered at the slaughterhouse ‘Plukon’. The broilers were caught 5 at a time (in one hand two broilers and in the other hand three). 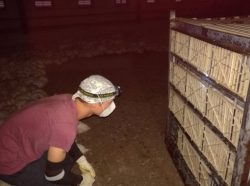 The catching and loading process is the most stressful period in a broilers’ life. Broilers are grabbed by one foot, 2 to 3 broilers at a time, and then stuffed into containers while hanging upside down. Eyes on Animals often witness rough handling during the catching and loading of birds, causing the birds to suffer from pain, stress and injuries. Nevertheless, today the catching was performed more carefully than we are used to witnessing. The containers were positioned as close to the birds as possible to ensure the period of being hung upside down was not prolonged. The catchers worked quietly and frequently closed the trays carefully. After loading the trays were inspected to see if any birds had got stuck or injured.

One of the biggest risks during loading is the catchers releasing the birds too early. If this happens the birds will fly against the tray, at high speed – leading to injuries and bruising. Unfortunately we saw this happen a few times during the course of our visit. We also observed the importance of sufficient headspace per tray. If birds are placed into trays, their natural reaction is to stand upright – as they are alert. If the headspace within the tray is limited, there is a big risk that the lid will hit the birds’ head when closed roughly. When containers have 5 trays instead of 4 – the headspace per tray is further limited, and the risk of injury increases. Eyes on Animals is of the opinion containers should therefore never be higher than 4 trays.

In total 60.0000 broilers were caught and loaded during the course of the day. Unfortunately, more and more chickens are caught during daylight hours, although it is known that this time causes more stress and bruises than when it is done at night. During daylight, birds are alert and will try to escape. Eyes on Animals encourage slaughterhouses to slaughter during the night, so that chickens can be caught during the night and slaughtered immediately upon arrival.

We want to thank broiler-farmers Rob and Egbert Wingens and Joep van de Waarenburg from Den Ouden catching company for their invitation, time, transparency and the opportunity to take photos.