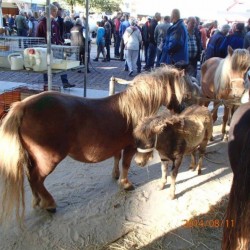 Eyes on Animals visited this yearly market for the first time. Compared to similar horse markets this one stood out by its tranquility. It is also smaller. The music wasn’t loud , pleasant even, also for animals. The fair and the music that goes with it was a certain distance from the trade market and only started at 11 a.m.
For the animals there was sufficient water and hay and we noticed that it was actually handed out to the animals, thus not just as a pretty display! There were enough buckets that could be fetched and brought back to the tent where the organizing commision was housed. Everything went smoothly.
The streets were covered with sand so they wouldn’t get slippery for the horses. There was enough space to tie up the animals. Horses were kept apart from the small ponies as much as possible. There were many young foals, several ones together with their mothers. Most of the foals were not tied up. They stayed with the mares out of their own free will.
The ages of the foals should be checked more thoroughly, as two of them were under the minimum age to be traded off. By the time Eyes on Animals was made aware of this fact, the animals had already been sold. The intermediate trader was addressed, but he denied knowing about this.

Young stallions were kept with the group they belonged to, but at a small distance so they didn’t cause any anxiety. The veterinarian was present the whole day.
Altogether there were about 500 animals: horses, ponies, and donkeys. Their overall condition appeared satisfying.

In general Eyes on Animals didn’t see apparent abusive behaviour, though one should take into consideration that EonA was present with just one inspector and thus cannot see everything that goes on. After the market ended some photos and videos taken by a visitor were posted on facebook showing indeed some maltreatment of ponies. Pushing, twisting of tails and hitting with a stick were some of the handling behaviours exposed that should not be tolerated.

Communication between Eyes on Animals , the market organisation and the veterinary service was smooth: sharing of ideas does pay off. Eyes on Animals counts on a continuation of transparency and communication, so the animals will profit, not only on this market but also on other horsetrading markets.