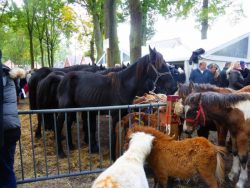 Today Eyes on Animals inspected the horsemarket in Zuidlaren from 00:30 to 19:45. Especially at night, the atmosphere at the market is grim. There are many drunken traders and unloading the horses is a hectic affair. While inspectors from Eyes on Animals and journalists from Piep Vandaag are filming how a pony is pulled out from an overloaded truck by his tail and lifted, some traders start to behave aggressively. Threatening words are shouted at us, we are pushed and one of the dealers tries to hit the camera from the hands of the PiepVandaag journalist. It is striking that no one comes to our aid. When we start looking for help, we are sent from one person to the next. Police say they cannot not help us, and also the market leader refuses to take action. Finally we go to the nearest police station and report the incident. Because of the threats and the atmosphere at the market we cannot sufficiently check on the welfare of the horses overnight. 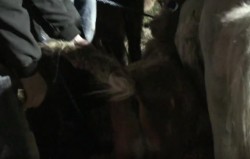 During the day there is a new Eyes on Animals team present. There are screens installed to muffle the noise of the fair, there are water tanks with buckets, there is hay available and some ponies are housed in groups. However, we see that the buckets with water and hay are little used. Most of the horses don’t get any water during the whole market, which is 18 hours long. The condition of the horses is fair to good. We do not see any extremely sick or skinny horses. However, some horses are a bit skinny or slightly sick (snot, coughing). We see that some horses are tied too tightly or too close together. One pen is overcrowded with ponies. During the loading of animals we see a lot that goes wrong, such as ponies hoisted up by the tail, horses that run in all directions, rear or run out of the truck again.

Eyes on Animals is generally satisfied with the measures taken to improve the welfare of the horses on the market, such as noise-muffling tactics, water tanks and hay. Nevertheless Eyes on Animals is very disappointed by the aggressive stance of some traders and the lax response of the market leadership and policemen. In addition, the welfare of the horses is an issue especially during loading and unloading. In our opinion, the NVWA and market leadership should check this better, especially at night. Also there should be better monitoring to see whether the horses are regularly watered and 18 hours is far too long for equines to have to remain on a market.