An Eyes on Animals team was returning to The Netherlands after giving a course to police officers in Belgium on the requirements of the animal protection during transport legislation. The team received a message concerning pig farmers setting up blockades at a number of pig slaughterhouses across the Netherlands, resulting in many trucks loaded with pigs forced to wait in line-ups for hours.The reason for these blockades was to protest the drastic drop in prices which they were receiving for their pigs, as the dioxin crisis in Germany is having an influence. Lidl was already announcing 20% off pig-meat products on its shelves. 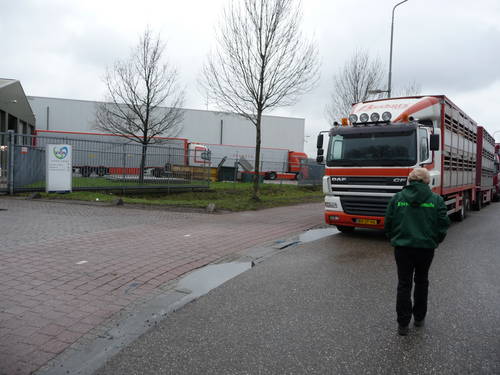 Eyes on Animals supports this NVV organized initiative, as the expectations and financial concerns of the pig farmers are interdependant with animal welfare. The pig farmers should be given the chance to run their businesses in the best way for animals, but this is strongly influenced by their own finances. Many pig farmers are now losing money on each pig they produce, and we are worried this could lead to serious animal welfare problems and depression among farmers who are trying their best. Eyes on Animals shall definitely follow any future actions by the NVV with vigilance, as it is nevertheless not acceptable that animal welfare be jeopardized. The ordinary journey to a slaughterhouse causes enormous stress. Every extra minute of waiting is undesirable.Fortunately, a consensus was reached between the nVWA and the NVV to lift the blockade in consideration for the welfare of the pigs. At around 15:00 at VION Boxtel, Eyes on Animals checked to witness that all of the transports had been cleared.