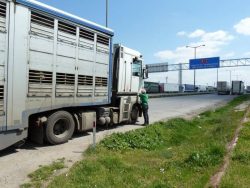 European livestock transporters are required to abide by the European animal protection during transport regulation (EC 1/2005), even if they are operating outside of Europe, as ruled by the Court of Justice of the European Union on 23 April 2015. The case involved German veterinarian authorities who had refused to grant permission to a carrier wishing to transport cattle to Uzbekistan, a journey of over 7,000 kilometers. The transporter had not reserved any resting place for the transportation portion outside of the EU. This would mean that the animals would be transported for 146 hours, without rest and adequate provisions.

The Court informed the German authorities that transports to countries outside the EU may indeed be refused when they do not meet the EC 1/2005 requirements. The court also stated that the Transport Regulation definitely does apply to the transport area outside the EU.

Eyes on Animals is very pleased with the court’s ruling. Eyes on Animals served complaints to the Netherlands Food and Consumer Product Safety Authority (Nederlandse Voedsel- en Warenautoriteit – NVWA) as well as authorities in other Member States approving the export of livestock to third countries where the maximum journey time would be exceeded once the animals entered the third country and no resting place was provided. NVWA stated that they could do little because they believed the Transport Regulation is not valid outside Europe. Eyes on Animals disagreed and has now been vindicated by the court’s ruling.

Congratulations to the German authorities that had the guts to insist that the essence of the EC 1/2005 was of course to protect animals during the whole journey! We wish more authorities were confident like this.