Eyes on Animals was hired as a tutor at an EU-SANCO training on animal-transport for official veterinarian inspectors from Member States all over Europe (including Turkey) that took place June 25 – 27 in Slovenia.

Purpose of our talk was to give examples of how positive cooperation between NGOs and officials can lead to animal-welfare improvements during transport. We also gave examples of best-practices that certain transporters worked on with us, and encouraged the veterinarians to spread these ideas in their countries.

Our focus was on the need for harmonized application of the rule regarding access to animals (including poultry) during transport, catching fraud particularly occuring in the long-distance transport of animals and Welfare Trainings for chicken-catchers.

During the training there was also a practical session where a livestock truck with Polish horses was inspected unloading the animals at a nearby control post in Italy. The horses were on a long-distance journey to a slaughterhouse in Italy. Conditions were in general according to the EU norms, with dividers placed between each horse to protect them from being trampled during transport. 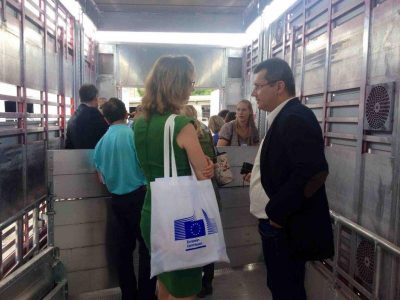 Although long distance transport is always difficult, it was clear that the legislation in Europe far better protects horses compared to the horse transports seen recently in Argentina, Uruguay, Mexico, USA and Canada. In these countries many horses are trampled, as there are no dividers or single boxes.

We will be sure to inform the grocery stores and snack bars in Holland still importing horse meat from abroad of this difference.