Home » Our inspections » transport » Drama at the EU/Turkey border 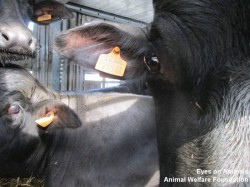 Again drama at the Bulgarian/Turkish border. This time it concerns 28 pregnant buffalos from northern Italy. They are being blocked inside the border because of a mistake in the paper-work. The buffalos arrived to the border last Wednesday morning (08.10.2014), after a trip of almost 2000 kilometres. The Bulgarian inspection post let them through but the Turkish have not. The animals are thus stuck on a truck in a parking lot outside of the duty-free mall in the border. The reason- the animals come from Piemonte in Italy, a region that was not allowed to export to Turkey because of Bluetongue disease in the past. This region has been cleared of bluetongue but the import certificates have not been updated- thus the paper work does not match.
Berker, our volunteer veterinarian living in Istanbul, drove today to the border to check on the animals. The driver is one of the better ones we know, trying to keep them alive by having hay delivered into the border and giving them water via the access doors along the truck. Nevertheless, due to cramped conditions and growing amounts of defecation and ammonia in the vehicle, the condition of the animals is becoming worse per day. In the meanwhile, teams from back home are busy writing letters to the Turkish authorities in charge of import, the Italian Embassy and Consulate in Turkey, the EU, OIE and the UECBV and the Italian veterinarians in this region in the hope of finally getting the animals out of the border and to the nearest place where they can be unloaded and properly cared for. We will keep you up to date.