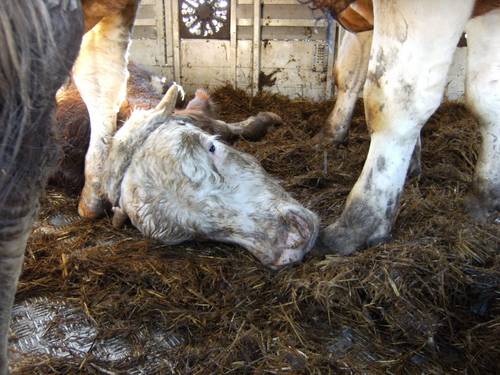 Today one team holds a meeting with the Director of the Department of Agriculture in Edirne. The two officials from yesterday are also at the meeting. It is a productive discussion about the urgent need for a stable at the border. We also make it clear that suffering animals must be treated or euthanized, not simply left to slowly die on the trucks. They insist that it is still difficult to organize the euthanasia of suffering animals- one needs written permission from the importer and a private veterinarian must do it… However, they say that a lot will change on December 13th when Turkey will adopt all the EU animal-welfare legislation, including the EC 1/2005 on the protection of animals during transport. As of December 13th transport companies will have to unload animals after reaching the EU maximum transport time as well.

The other team continues to check on livestock trucks at the border. One from the company Agricoop has a bull lying down in poor condition. He is being trampled and does not attempt to get up. The drivers appear disinterested but after we insist they finally take action to get him up. They have another 9 hour drive ahead of them to Ankara, one cannot leave a bull lying down this long as he will face further trampling. They tie a rope around his head and finally manage to get him up. He appears shaky on his feet and weak, but after drinking some water and calming down he seems alright. We suggest they now continue.

Three Turkish journalists come to the border to report on our work and check on the animals. To view some of the published articles, click Edirne Newspaper article and Sabah Newspaper article.

At night, the two EU sheep trucks blocked since Friday (because of fraud in the papers) are finally allowed to continue to their destination- a farm only 100km away. One of our teams trail it. During unloading they count 14 dead sheep. The surviving sheep walk out slowly from the truck and go straight to the water and feed, and then lie down. They appear all very weak and exhausted.

The other team remains at the border and checks on a Polish truck with young Hungarian bulls. The conditions are very poor inside; the animals are completely overcrowded with little space to move and it is dirty. The covers of the water troughs are filthy with manure splattered on them, and there is no water inside; they do not look as if they have been ever turned on or used. Like with all trucks we observe that do not fulfill the EU requirements, we will send a complaint with photos of evidence to the pertinent authorities about this vehicle.

Eyes on Animals has filed an enforcement request with the minister of farming, nature, and food … END_OF_DOCUMENT_TOKEN_TO_BE_REPLACED