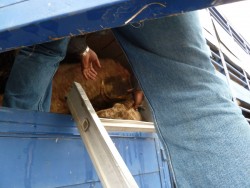 The drivers of the 2 sheep trucks blocked now since 4 days take the right decision to emergency slaughter several of the dying sheep on board, to finally end their suffering. There is still no word if they will be allowed to leave soon, and thus the sheep are still stuck on the truck which is now smelling very strongly of ammonia. Many sheep have snot dripping from their noses.

We hold a meeting with a man in charge of organizing the paper work for the drivers and another from the Department of Agriculture in Edirne to express our serious concerns for the animals that are passing through this border. We insist that if this trade is to continue, there is an urgent need for them to build a stable so that blocked animals can be unloaded and properly cared for instead of left for days and even weeks on the trucks.

They are interested and understand our concerns. They say our work in the past has already stirred up some discussion about the need for a stable. They need however support from their superiors in the capital, Ankara, and also from the EU for such an expensive project. As well they need the support and interest from the transport companies that bring animals across this border. If a stable is to be built, it must follow the EU requirements and actually be used by the transporters.

In the evening we see that the two EU sheep trucks are still blocked. The sheep appear exhausted and hungry, particularly those on the lower floor which are much more crowded than above. We organize buying bales of hay and feed them before heading to bed ourselves.