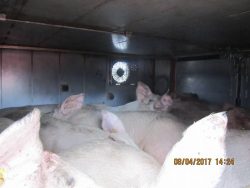 Today we made an unannounced visit to the pig slaughterhouse VION in Boxtel. The purpose of this visit was to check the pig trucks and to discuss with the drivers possible improvements to the trucks to improve animal -welfare. The loading density of the pigs on the trucks we checked on was in accordance with the EU legislation, nevertheless we thought that the pigs in some compartments were too crowded. The law, therefore, tolerates quite high loading densities. What stood out was that there was fighting in many trucks. These are often fights over ranking order because the pigs are unfamiliar to each other. We talked with the drivers about the use of mobile partitions so that the pigs can be transported in stable groups. In this way, the compartments can be adjusted and the pigs remain in the same groups on the truck as they were raised in on the farm. Often, at the farm, pigs are mixed together for transport and put into groups of nine (or 18). It would be good if VION, together with the livestock transporters, looked at the possibility of not mixing up the pigs, keeping them always in the same groups as on the farm so that the transport is calmer.

During our inspection, we also saw a closed truck with forced-ventilation. The driver opened the ventilation flaps for us so that we could observe the animals inside. Most of the pigs were sleeping. The air in the truck felt somewhat moist. The driver said that this was not a problem. During the summer he sometimes used additional straw in order to bring the humidity down. The truck had no access doors but the same was true of many other conventional trucks that we observed. Eyes on Animals considers it important that at all times during transport there be access to the animals. This is also a legal obligation; the EU animal-transport legislation requires that one can access the animals on board to provide first aid and help if necessary.

During the visit, we talked to Mr. Blom (VION Farming) and Mr. Oorburg (Quality Manager). They let us know that, amongst others, VION is working on a heat protocol with the NVWA (Netherlands Food and Consumer Product Safety Authority) and the industry to protect pigs from heat-stress during the summer. It is also experimenting with a new method – a kind of cape – to herd pigs in a calmer way.

We want to thank VION and the drivers for their time, the additional information and the cooperation extended during our visit.