Home » Our inspections » farm » Announced visit of a standard pig farm in Brabant,Holland

Today inspectors from Eyes on Animals visited a standard (factory) pig farm in Brabant. There were 310 breeding sows and 2400 ‘slaughter´ pigs. After 5 farrowings, the breeding sows are culled and sent for slaughter as well. One week before farrowing the sows are placed into farrowing crates, where they remain until 4 weeks after giving birth. The piglets are then removed from their mom, and the sow is moved to another area of the farm where they spend 2 more weeks in individual crates (called gestation crates) to be inseminated. Once insemination is successful, the sow is placed in a group-stall system where she is kept for the remaining 9 weeks of her gestation. Here she is given some room to move around and can intereact with other sows. All in all, it means that the life cycle of a breeding sow on a typical Dutch factory farm consists of 7 weeks in a crate where she cannot move or turn around, and 9 weeks in a group stall where she can. She is indoors throughout her life. 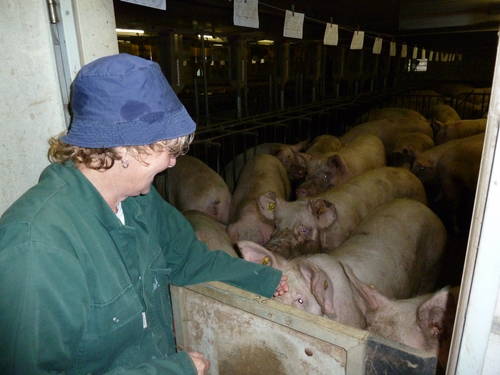 As of 2013, gestation crates will be banned resulting in sows being placed in group housing directly after the weaning process, and giving them 2 weeks longer in an environment with more freedom to move and socialize. 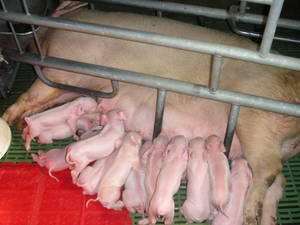 This is an example of a farrowing crate, where the sowspends 5 weeks at a time. One week prior to giving birth, and four weeks with her piglets nursing. 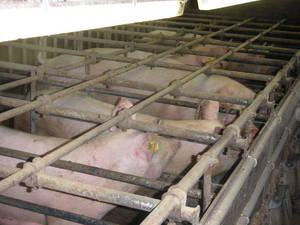 These are gestation crates, where sows are kept after their piglets are weaned from them. The sows are placed in these crates in order to be inseminated. In 2013 gestation crates will be banned in the EUas they restrict all natural movement and behaviour of the sow. 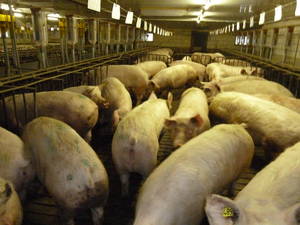 This is the group-housing pen for pregnant sows.

A few days after being born, the piglets are placed in CO2 to be rendered unconscious and have their tails docked, be vaccinated, get ear tags and, for the males, be castrated. The piglets are separated from their mother at 28 days of age. They then go to a group-housing stall where they spend the rest of their lives (another 5 months). On this farm there were (clean) windows allowing natural light to come in. The pigs are slaughtered when they are approximately 6 months of age. The ´slaughter´ pigs on this farm are all sent to VION slaughterhouses in the Netherlands, meaning that they are never transported on long-distance journeys. 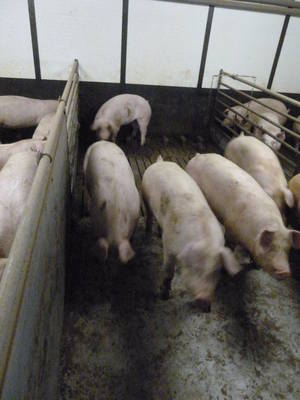 This is the group housing stall for the ´slaughter´ pigs where they spend 5 months of their lives being fattened before slaughter.

During our visit we observed one laming pig that was in a poor condition. He was being bullied by the others, who were biting and pushing him. We suggested to the farmer to separate him, so that he could at least wait in peace for the veterinarian to come and euthanize him, which was planned for in the next few days. Unfortunately there was no possibility as every space was already in use. We suggested that several sick pens be built on the farm to give individuals in a bad condition some protection.

We would like to thank Jan for allowing us to visit his farm. He is a very busy and warm-hearted man, but we hope that he will continue researching into more ways of respecting the natural behavioural needs of these very intelligent animals so that their welfare can be increased.