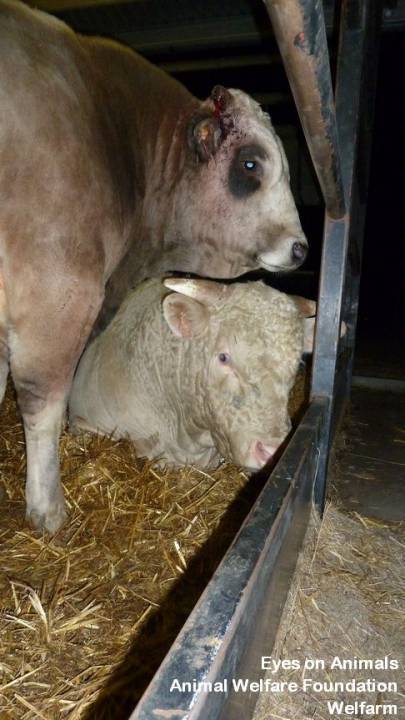 Today we dropped by unannounced to Vet Express, a control post in Hungary where animals on long-distance journeys can be unloaded and rested for 24hrs. When we arrived there were 4 livestock trucks in the parking lot. All had Slovakian licence plates (3 from the company Bovinex and 1 from the company Pemag). They were all transporting charolais and black angus bulls from the Czech Republic, destined for slaughterhouses in Turkey. Two of the bulls had broken horns, but were legally still fit enough for transport as the horns were not bleeding too hard. The rest of the bulls made a healthy impression. They had been given plenty of fresh hay and water, plus salt licks at Vet Express. The space inside the pens was not very big, giving the bulls only limited amount of room to move about. However, Vet Express is finished with designs to expand and their new stables will offer more space to the cattle. We showed the manager of the stable several films we made of EU livestock trucks arriving at the Turkish boder. He was quite horrified. We also showed him the photos of the bulls stuck on the Animex truck last week inside the Turkish border. These bulls had been unloaded at Vet Express during their voyage from Latvia towards Turkey. We informed him that if ever bulls arrive with Iraq as their final destination again, he should immediately notify the veterinarian and see that it not be allowed to continue because Turkey does not allow livestock trucks to transit their country. We also suggested that he does all he can to help us educate drivers on animal-welfare-during-transport by, for example, checking that they place enough fresh bedding in the truck before reloading their animals at his control post. we would like to thank Vet Express for their time and for caring.

Eyes on Animals has filed an enforcement request with the minister of farming, nature, and food … END_OF_DOCUMENT_TOKEN_TO_BE_REPLACED